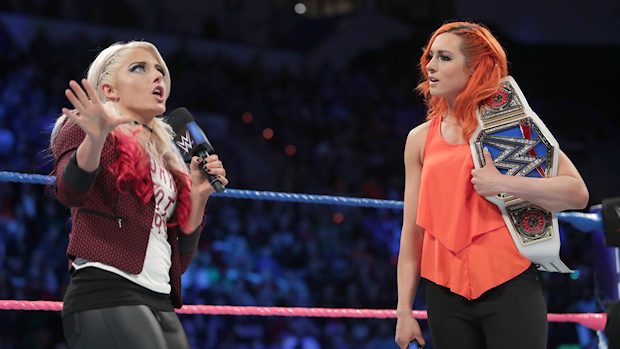 – Becky Lynch has been on a social media rampage as of late as the SmackDown Women’s Champion has been using Twitter to fire shots at Ronda Rousey, Charlotte Flair, and other rivals. On Saturday, “The Man” took aim at Flair, Sasha Banks, and Alexa Bliss.

You can call yourself a queen, or a boss, or even a goddess – but if you want to see narrow minds explode, call yourself The Man. pic.twitter.com/YEtqDBZuqL

Lynch and Bliss have a lot of history together. They came up through NXT at the same time, both as teammates and opponents. Bliss achieved her first victory on the main roster by defeating Lynch on the August 9, 2016, episode of SmackDown LIVE. Lynch then became the inaugural SmackDown Women’s Champion and feuded with Bliss in the ensuing months. The two exchanged victories, but Bliss stayed SmackDown Women’s Champion at the conclusion of their program.

Here is a clip of Lynch and Bliss exchanging words ahead of a title match.

“One-third of THE RIOTT SQUAD returns as LIV MORGAN a.k.a. DADDY experiences the world of virtual reality with Austin Creed as she tries out the creepy game THE EXORCIST: LEGION and the catchy BEAT SABER! Can she handle the life-like gaming experience?!”