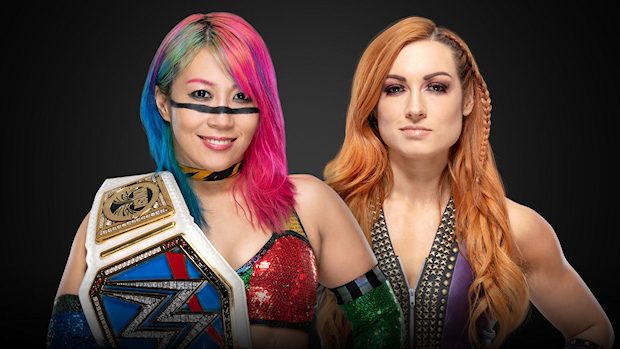 Asuka vs. Becky Lynch is now official for the Royal Rumble.

On night’s episode of SmackDown LIVE, Lynch defeated Carmella and Charlotte Flair in a Triple Threat Match to earn a SmackDown Women’s Championship Match against Asuka at the Royal Rumble on January 27.

All three Superstars seemingly had their chances to secure victory, but Lynch recovered from a vicious spear at the hands of Charlotte, and after Carmella dropped Flair with a kick, Lynch synched in the Dis-arm-her on Carmella to get the tapout victory, securing the SmackDown Women’s Championship Match.

Asuka arrived after Becky’s victory, and the two combatants faced off. Both women were spirited as they exchanged words and stared each other down.

After SmackDown went off the air, Lynch reminded the WWE Universe that Asuka never beat her at WWE TLC.

A miscommunication behind-the-scenes led to Asuka vs. Lynch originally being announced for the Royal Rumble on an episode of WWE Main Event that aired last month. WWE then offered a storyline explanation for why it wasn’t official yet, with Paige tweeting that she tried to make the match just before her time as SmackDown LIVE General Manager came to an end, but got denied.