Backstage News On Ronda Rousey's Comment On Raw About Her Husband - PWPIX.net 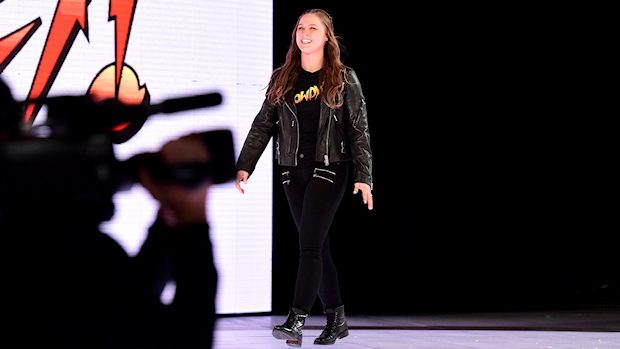 Last Monday night on Raw, Ronda Rousey sat at the announce desk to scout Nia Jax before their Raw Women’s Championship Match at WWE Money in the Bank. As Jax took on Natalya, Michael Cole said something about Jax stating earlier that Rousey is “ripe for the picking.” Rousey responded, “Ripe for the picking is something only my husband calls me.”

Her comment was awkward the first time she said it but it was worse when she repeated it the second time after the commercial break. The line sounded like something that Rousey would not have come up with herself and according to Dave Meltzer on Sunday’s edition of Wrestling Observer Radio on F4WOnline.com, WWE creative did indeed script her to say it.

Meltzer said, “So the Ronda thing was evidently scripted and that’s probably why the announcers went back and asked the same question twice. Several people [in WWE] have remarked that [it was] very bad judgment putting Ronda in that position, scripted. Clearly, she wasn’t with it. She was so standoffish. It was the wrong Ronda. You can tell she’s not a good actress. When she’s not happy you can see right through it.”

Meltzer added, “It was bad creative to put her in a position to sit there for 11 minutes and have nothing to say other than, ‘My husband says that.’”

As for the match itself, Natalya tweaked her knee just as she stepped on Jax’s back. Nia, who didn’t see the injury occur, capitalized with a Samoan Drop to earn the win.

Jax seemed genuinely concerned about a potential injury to Natalya once she realized what had happened, but she didn’t get to help her out all that much. Rousey left the announce desk, entered the ring and successfully warned Jax away from Natalya’s side with little more than a glare and some pointed words.