Home / Wrestling News / WWE News / Who Were Bayley and Sasha Banks Opponents On Raw?, Backstage Inside Joke On Their Ring Names

Who Were Bayley and Sasha Banks Opponents On Raw?, Backstage Inside Joke On Their Ring Names 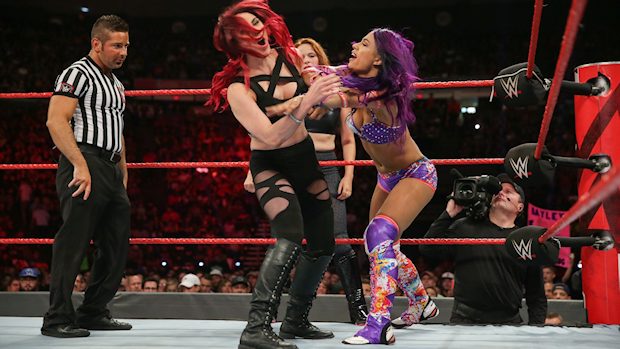 Last week on Raw, Sasha Banks told Bayley how she really felt with an emotional, soul-baring confession after months of conflict. So, does that mean their friendship is finally secure? It’s looking that way.

Not only did they make relatively quick work of a pair of local competitors, but when Bayley went to raise Banks’ arm following the match-ending Bank Statement, “The Boss” stepped away, seemingly refusing the gesture. Banks, however, then offered Bayley a hug, which was accepted in a heartwarming fashion.

Oddly, WWE did not post a clip of their match on YouTube, although you can find it on WWE.com.

It's hugs all around between @SashaBanksWWE & @itsBayleyWWE on #RAW! pic.twitter.com/aT08D7vOzC

As for the identity of their opponents, Samantha Simon and Karen Lundy, they are independent wrestlers Jaylee and Moxie Mollie. The announcers did not say who is who, although Jaylee is the one who tapped out to Banks.

Jaylee, who made her wrestling debut last July, currently reigns as OVW Women’s Champion. She was trained at Ohio Valley Wrestling and one of her trainers, Rip Rogers, made note of her appearance.

There’s not too much info online on Jaylee since she’s relatively new to wrestling and apparently has no public social media accounts.

Moxie Mollie mostly wrestles in Indiana and currently reigns as the women’s champion of ARW Pro Wrestling, an independent promotion based in the state. The promotion made note of her appearance on Raw.

Behind-the-scenes, there was an inside joke on their names, but it’s not a mean one as WWE tends to do at times. Dave Meltzer noted on the post-Raw edition of Wrestling Observer Radio that the name Samantha Simon is a spoof on WWE producer Dean Malenko’s real name, Dean Simon. Meanwhile, the name Karen Lundy is based on producer Arn Anderson’s real name, Martin Lunde (which apparently is pronounced as “Lundy”). WWE almost never uses a local competitor’s name on the independent circuit, so sometimes they’ll name him or her after a person who works backstage.

Finally, this bout was apparently a first on Raw. This was apparently the first time ever in the 25-year history of WWE’s flagship show where a tag team match featured a tandem of female enhancement wrestlers.

Truly a night of firsts!