Chris Jericho Wants A Match With Brock Lesnar In All Elite Wrestling - PWPIX.net 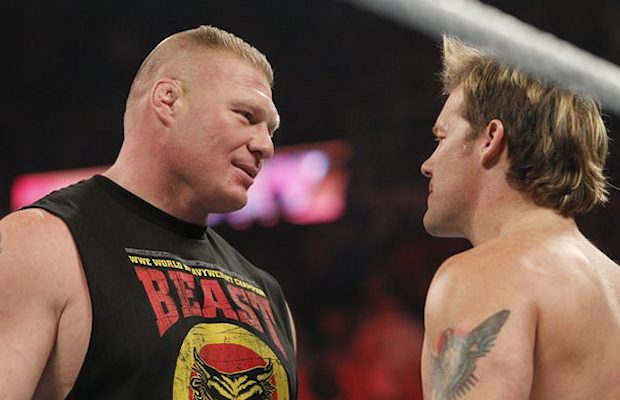 Jericho claimed that All Elite Wrestling (who he signed a contract with earlier this month) is only interested in “maybe 6-8” talents from WWE, ROH, and IMPACT.

“Hey, @wwe, @ringofhonor & @IMPACTWRESTLING … I love watching you push all your randoms, But just know that we are interested in maybe 6-8 of your talents total. We don’t need you! @AEWrestling.”

Jericho then sent out a tweet making fun of Lesnar’s body.

“Intimidation and fear a LONG way in our business guys. But let’s be honest, @BrockLesnar needs to pull up his pants and lose the gut… the dream is over dude. I don’t play by the script… @wwe @AEWrestling.”

Jericho then said in a response to a user that he’s not drunk.

“Ummm not drunk at all…”

Jericho also responded to a user imploring for WWE Superstars Zack Ryder and Tyler Breeze to reach out to Jericho for potential work with AEW.

Dave Meltzer noted on the Wrestling Observer Forum that Jericho was “working” to set up a potential match with Lesnar in All Elite Wrestling.

In response to a reader suggesting that Jericho was drunk, Meltzer pointed out that Jericho has done something like this before, noting tweets directed at Kenny Omega before their match in Japan last January.

“Were his tweets about Omega in 2017 also drunken tweets? Learn from history. He’s building for future opponents just like 2017. Whether it happens, that’s up to dueling checkbooks, but that’s Jericho’s goal here,” Meltzer wrote.

Meltzer added, “I know things on this subject weeks ago. I don’t write anything, especially as much as it hurts my unless I have knowledge. He is 100% working you here if you think these are drunk tweets.”

Meltzer was more clear on the subject on Wrestling Observer Radio.

“I believe that Vince [McMahon] will pay anything not to lose Brock because we’ve seen it with UFC and I think it will be even stronger with AEW. Brock’s number is so high but who knows? Who knows, it would be a coup. Put it this way, Chris Jericho wants a match with Brock Lesnar and Chris Jericho has a lot of . That doesn’t mean a deal is gonna be done that’s a stupid deal but who knows,” Meltzer said.