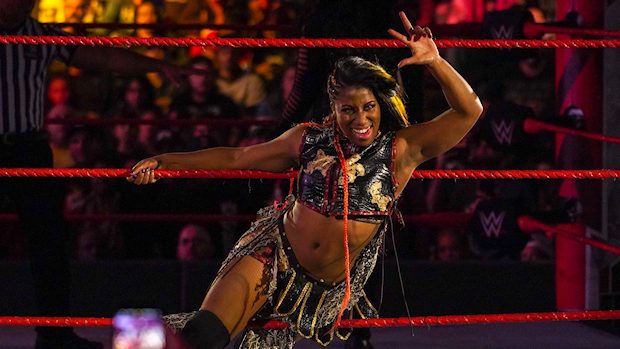 Moon — real name Adrienne Reese — and fellow wrestler Matthew Palmer tied the knot this past week in Las Vegas, Nevada at Hard Rock Hotel & Casino Las Vegas. On top of that, they had a Game of Thrones/Harry Potter-themed wedding.

Click here to see a photo of Moon and Palmer getting married and a few more shots from the wedding.

Moon and Palmer have been together for nine years. The fact that Palmer also wrestles for a living is just an added bonus for Moon.

“It’s awesome to have him as a professional wrestler because we just bounce [ideas] back and forth. He knows the lifestyle. He knows everything that I deal with and he gives me advice. It’s nice to come home and have someone that understands everything that I go through — the good, the bad, the ugly, the awesome, and the perfect,” Moon told GuideLive in September.

While there were only a few opportunities throughout their wrestling careers for the couple to work together, perhaps their top highlight happened the day they met.

“Her definitive memory of us meeting was when we actually had to do a training drill together, and I drop kicked her in the face,” Palmer said. “And then she hated me for a while.”

“I thought she was gorgeous and awesome — and then I drop kicked her in the face. It was the drill. I had to do it.”

Their years together in and out of the ring culminated in Austin, Texas — the first city that really “gave both wrestlers a chance” — at an Inspire Pro Wrestling event in 2017.

Palmer brought Moon to the show and ended up proposing to her in the middle of the ring following a tag team match in which his partner — who never actually got involved in the match — held on to the engagement ring.

“I wasn’t really into the match,” Palmer said. “I was more nervous about the proposal and not losing the ring.”