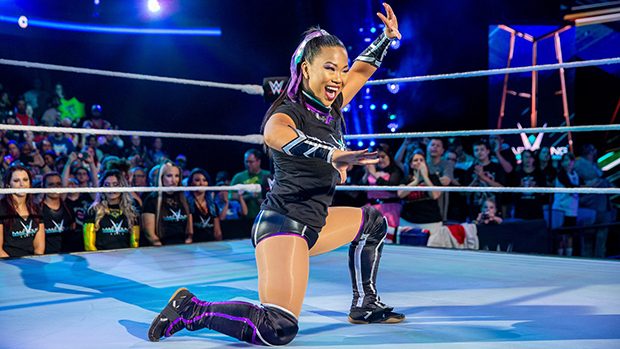 Karen Q (aka Karen Yu) is out of action after sustained a leg injury last Saturday at an NXT live event in Atlanta, Georgia.

Karen Q sustained the injury during a tag team match where she partnered with Bianca Belair against Reina Gonzalez and Rhea Ripley. The injury appeared to occur while she’s running the ring ropes. Just as she’s coming off the ropes, Karen Q suddenly stops running before hitting Ripley with a suplex. The suplex transitions into a pinfall attempt, but Gonzalez breaks it up with a strike to Karen Q’s right leg. Karen Q then rolls to the side of the ring and is unable to continue to the match. She got assisted to the backstage area after Belair won the match for her team.

Here is a clip of the moment Karen Q sustained the injury.

Here’s video footage of what appears to be Karen Q’s injury from #NXTAtlanta. #TheFactionShow pic.twitter.com/TrdKAlrQGv

In a post on social media on Sunday, Karen Q overstated the severity of her injury by claiming that she broke her leg. Her post included a photo of her wearing a cast on her left leg and an X-ray image showing a fractured lateral malleolus (according to WWE), which is the bone on the outside of the ankle joint.

Unfortunately, I won’t be able to finish the #NXTRoadTrip. I’m so proud of the matches I had this weekend and grateful to have the best family, friends & coworkers. My leg is broken, but I will be back! Thanks to all who have reached out and showed me love! #HoldMyDrinkIllBeBack pic.twitter.com/0KFgnm2RLt

Karen Q followed up on her injury on Monday, saying in a video of herself at an airport that she broke her foot.

According to her boyfriend, independent wrestler Bison, Karen Q underwent surgery this morning.

Staying up late, praying for a successful surgery this morning.
Staying close by to carry you home. 🏡@Karenmeee#CantSleep #Recovery #KarenQ pic.twitter.com/rp5Ehij7ta

The tour was the first NXT road trip for Karen Q, a 2018 Mae Young Classic tournament competitor who joined the WWE Performance Center last February. Although the tour ended on a bad note, Karen Q was able to experience another career first before suffering the injury, as she wrestled in front of her mother for the first time ever at a live event the night before in North Charleston, South Carolina.