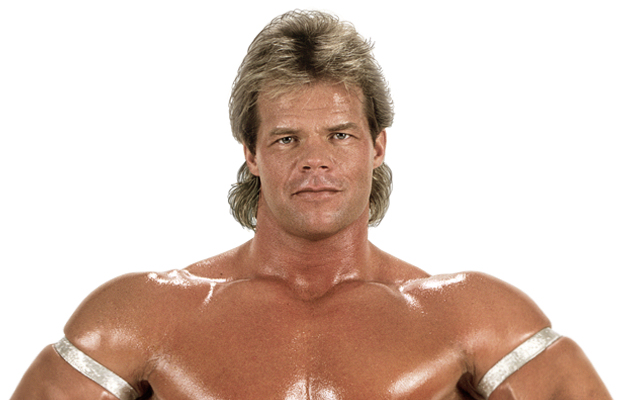 In 1987, wrestlers and fans learned in an instant that Lex Luger was “The Total Package.” As the replacement for Ole Anderson in The Four Horsemen, the tanned, chiseled newcomer thrived.

Luger won his first of five United States Championships with The Four Horsemen, while also providing added muscle for the popular faction, before ultimately choosing to fight his own battles.

In fact, a number of these came against his Horsemen running mates, including a showdown with Barry Windham at The Great American Bash 1991, in which Luger captured his first WCW World Heavyweight Championship.

Covered in patriotic decor, Luger embarked on the “Lex Express,” a nationwide bus tour during which he campaigned for a shot at the WWF World Heavyweight Championship.

Lex ultimately received his opportunity at the title at SummerSlam 1993. While he emerged victoriously, it was due to a count-out, which meant the WWF World Heavyweight Championship stayed with the giant sumo.

As co-winners of the 1994 Royal Rumble Match, Luger and Bret “Hit Man” Hart both earned a chance to unseat Yokozuna at WrestleMania X.

In September 1995, Lex suddenly left the World Wrestling Federation, making a shocking appearance on the debut episode of WCW Monday Nitro, one of the first major salvos of the Monday Night War.

“The Total Package” collected more WCW gold — including the WCW World Heavyweight Championship — and stood with fellow WCW stalwarts against the nWo’s insurgency.

He would, however, complete another defection in 1998 when he joined the New World Order splinter faction, nWo Wolfpac.

Now 64 years old — born June 2, 1958 — Lex Luger is enjoying a much simpler life in Buffalo, New York. He spends most of his free time helping others at local schools and churches.