Home / Wrestling News / Here and There / Is Madison Rayne Joining WWE After Wrestling In The Mae Young Classic?

Is Madison Rayne Joining WWE After Wrestling In The Mae Young Classic? 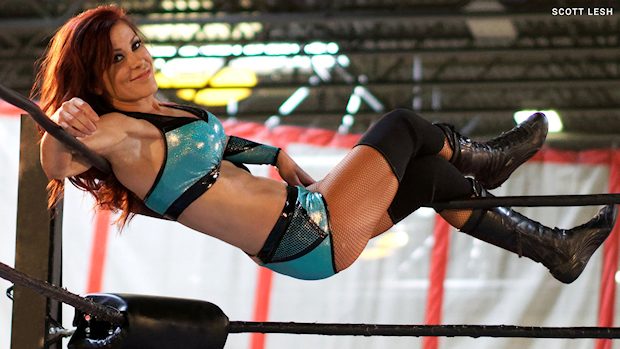 After wrestling in the Mae Young Classic, Madison Rayne has made her next move and it’s not joining WWE.

The six-time Knockouts Champion is joining Ring of Honor’s Women of Honor division.

Rayne announced today on The Taz Show that she signed a one-year contract with ROH.

“Let me preface this by saying that 2018 has been possibly my biggest year in wrestling. In 13 years, that’s saying a lot. It’s been very unexpected. A year and a half ago I wasn’t sure I was going to keep wrestling or what my professional career looked like,” Rayne said (h/t WrestlingInc.com).

“I’ve been able to work every big promotion, I got to do ALL IN and I’m very humbled by all of those experiences. In doing that and having all of those opportunities, I was given a chance to be able to get in there and see what was going to be best for me, my career, for my family and what made the most sense. After a really successful year of being kind of a wrestling nomad, I have found my home and I am so, so happy to announce that I have signed a one-year contract with Ring of Honor.”

Rayne returned to ROH last November (she wrestled two matches in 2008) and most recently wrestled for the promotion at their television tapings in July, where she unsuccessfully challenged Sumie Sakai for the Women of Honor World Championship. Rayne also challenged Su Yung for the Knockouts Championship at IMPACT’s Slammiversary XVI pay-per-view event in July. She lost to Yung and was put in a coffin in a post-match angle to write her character off.

On July 30, WWE announced that she would compete as Ashley Rayne in the 2018 Mae Young Classic. In a First-Round Match that aired last week, she lost to Mercedes Martinez, thus being eliminated.

Prior to the match, Rayne was overcome with emotion on wrestling her first match inside a WWE ring in this backstage interview with fellow IMPACT Wrestling alumnus Jeremy Borash.

Despite the loss, Rayne is thankful for finally receiving the opportunity to wrestle for WWE.

Thank you God… Thank you to @joshmathews and my family, to everyone at WWE/NXT and the WWE PC, the WWE Universe and every single person who made this moment possible. Thank you to @realmmartinez for one of the best matches I’ve ever had. #WWEMYC