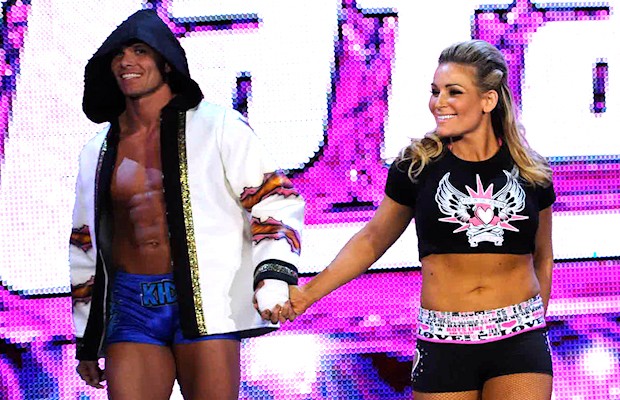 – This week’s episode of “Talk is Jericho” with Chris Jericho features Tyson Kidd and Natalya at this link. Jericho noted that Natalya was one of his first guests when he started doing the podcast and was the very first person he named when WWE asked who he wanted to interview.

At the end of the show, Jericho asked about Bret Hart’s return to the ring in 2010 at WrestleMania 26, and what it meant to the Hart Family. Tyson said that WrestleMania was the first time the entire family was together since Stu Hart’s funeral six years earlier, and even that was a milestone considering how splintered the family became after Owen Hart’s tragic passing. Natalya said that even WrestleMania was not without its drama and Kidd added that the first problem occurred when Natalya’s Aunt Allison told off John “Johnny Ace” Laurinaitis, the then-head of WWE talent relations. She caused a scene on Thursday—days before any of the festivities, because she was hungry, and didn’t feel like she should have to pay for her own food.

Bret was said to be furious with his family and reminded them that while they might be making special appearances, Tyson, Natalya, and Harry Smith still had to work in WWE. Ross Hart asked why their behavior should affect the current Superstars, to which Bret responded: “Do you have rocks in your head, Ross?”

They described the planning process behind Bret Hart vs. Vince McMahon at WrestleMania and said Vince was in a room with the Hart Dynasty, a dozen additional members of the Hart Family, Triple H and Shawn Michaels. Vince laid out the format, and Bruce Hart interrupted with: “No, this doesn’t make sense. That basically turns you babyface.”

Bruce started coming up with alternate ideas, before Vince could even get into the match. Bruce continued to interrupt and said that Batista should be involved, because of his prior altercation with Bret. Michael “PS” Hayes responded with: “Batista’s got kind of a big match that night.”

For those that don’t remember, Batista headlined that show against John Cena. Bruce started pitching SummerSlam matches until Bret interrupted him and ordered him to shut up. Bruce then decided to stop talking to the group and began to whisper loudly to his brothers. Natalya’s mother stood up out of nowhere and said: “I think Jim [Neidhart] should be involved.”

Jim, according to Natalya, is the most normal one in the family, probably because he’s not a blood relative, and decides to keep his mouth shut. Then there was a debate over who would play the part of the special referee. Bruce was originally pegged for the role but according to the rest of the family, “Wayne was always the referee in Stampede. Wayne should be the referee.”

According to Natalya, Vince McMahon was very entertained by all of this.