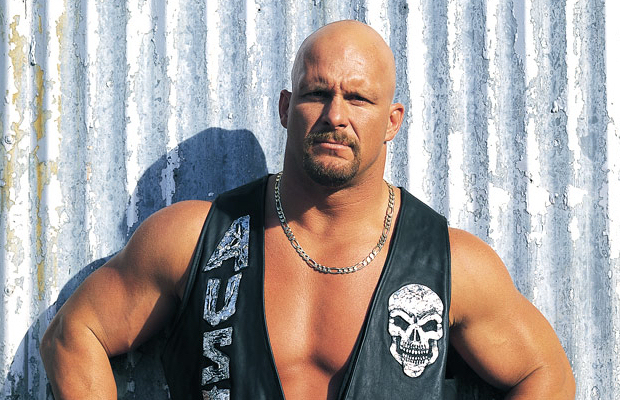 – WWE Hall of Famer Steve Austin recently spoke with talkSPORT in the UK. Austin was asked how he would position Brock Lesnar following his return match against Kofi Kingston this past weekend. Austin commented:

“That’s a good question. Here’s the thing you always strive to do: to command people’s attention with your presence and your presentation of the product once you get out there in the ring. And so, in a world of make believe, you want to make people believe in you and I think that happens the same with films – if you’re watching a movie, you want to believe what’s going on, ok? You can have eight matches [on a show] and they can be okay then all of a sudden they announce Brock Lesnar and you go: ‘Alright, everybody shut up – the real stuff’s happening now.’ Brock has made people believe in who and what he is, and he’s an absolute monster and he can back that up any day of the week. Look what he did in the UFC with diverticulitis. And the success he’s had as an amateur. And the success he had in WWE before he left for the UFC. He’s the real deal, he’s a freakishly strong athlete and I think he’s very entertaining and he’s really coming into his prime.”

“Paul Heyman happens to be cutting the best promos in the history of the business and he’s been cutting them for a long time, but those two are just a magic one-two punch. They feed off each other and Brock is a very scary individual when you get him between those ropes.”

“No matter what you think the business is about, you are in for a very physical endeavour when you’re facing him in the ring. Seth Rollins is certainly going to have his work cut out for him. As far as positioning him, I don’t know. It’d be easier to want to say: ‘Hey, let’s flip him baby because he’s a badass and people want to like him’. But I’d like him in the heel mode. I’d like him in the heel mode another six months, maybe even longer – just kind of ride it out – but I think to flip him now, just to flip him over to baby just because he’s a badass just for the sake of it would be the wrong reason. You’ve got to look across that locker room at the opposition and think: ‘You may be shooting yourself in the foot by doing this.’ Let him be who and what he is and just be a destroyer that walks through anybody he gets in the ring with, whether baby or heel.”