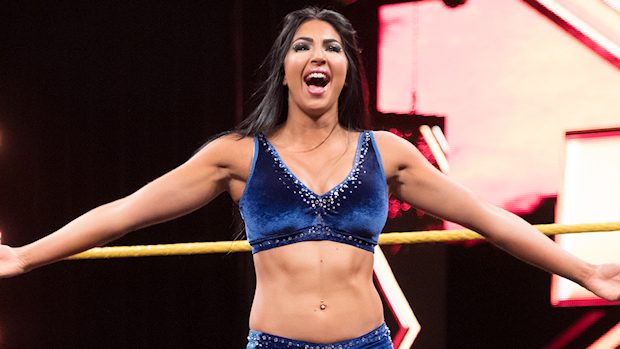 As has been noted lately, Billie Kay and Peyton Royce have both been out of action since November. Royce last wrestled on Nov. 29, 2017, where she lost to NXT Women’s Champion Ember Moon at an NXT television taping. While Kay was in Royce’s corner, her last match took place two weeks earlier in a losing effort to Kairi Sane at an NXT live event on Nov. 16, 2017.

The reason The Iconic Duo has been MIA in recent months is that both Kay and Royce got a boob job back in December. According to WebMD, those who undergo breast augmentation surgery should not do any heavy lifting for up to six weeks after the procedure. Since they wrestle, a breast augmentation will keep them out of the ring even longer.

Last week, WWE updated Kay’s WWE.com profile photos, which revealed her new boob job. The photos sparked a lot of chatter on social media. In this post on Instagram, Billie apparently responded to all the talk about her bigger boobs.

Interestingly, the photo which revealed Kay’s bigger bust has been deleted from her profile page. It now shows an older photo of her, which she has been using as her display photo on Twitter in recent weeks.

You can see the deleted photos here.

If there is any doubt on Kay’s boob job, Dave Meltzer reported in the latest edition of the Wrestling Observer Newsletter that she has been out action due to breast augmentation surgery.

While there was nothing mentioned in the Observer about Royce, she posted these photos earlier this week revealing her boob job.