Alexa Bliss Responds To Report That Dressing Room Scene On Raw Was Her Idea - PWPIX.net 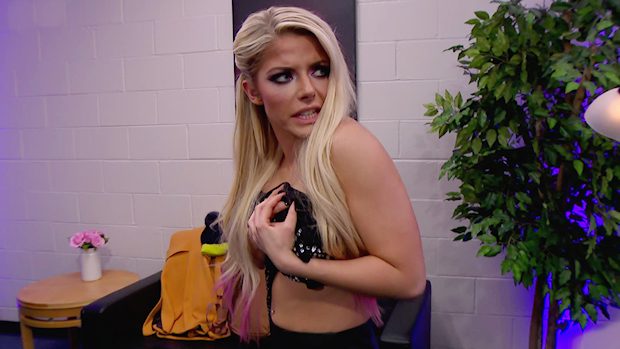 Does TV-PG include topless scenes?

On Raw last week, WWE took a page out of the Attitude Era by having a stagehand barge in on Alexa Bliss while she was changing in her dressing room. Alexa’s back was exposed, but she covered her chest while they proceeded to have an awkward interaction.

This controversial scene was supposedly Alexa’s idea. According to Pro Wrestling Sheet’s Ryan Satin in his Raw recap podcast, she did it as a tribute to Trish Stratus.

“From what I’ve been told the segment was Alexa’s idea. It was an Alexa thing, she was trying to do a little bit of a tribute to Trish Stratus because it was something Trish Stratus did back in the day. She’s a big Trish Stratus fan,” Satin said.

“So from what I heard it was something she wanted to do. It was not a thing that was pushed on her.”

ComicBook.com reported on Satin’s comments this morning, which Alexa quickly debunked over Twitter while waiting for her flight home from Raw.

Responding to their tweet linking to the report, Bliss wrote, “False.” She then quickly deleted the tweet. You can see a screenshot of her tweet below.

She then tweeted the following in reference to the report.

She also ‘liked’ these tweets.

The backstage segment resulted in an explosion of YouTube views as it amassed almost two million views within its first few hours online. As of Tuesday, the segment has garnered over 6.3 million views on YouTube. The next most viewed clip from Raw last week is Braun Strowman pushing over Vince McMahon’s limousine, which has drawn 4.8 million views so far.