Alexa Bliss On How She Joined WWE, Charlotte Helping Her In NXT, Friendship With Nia Jax 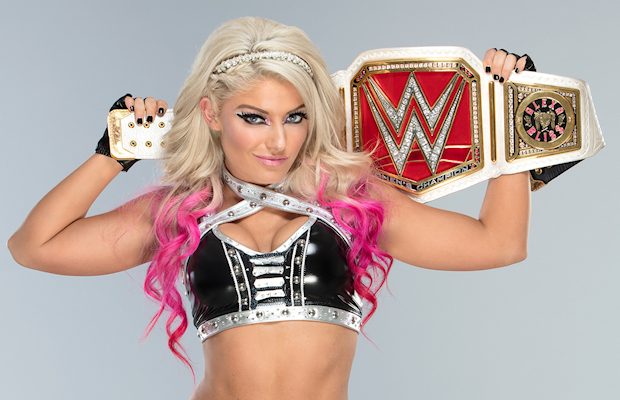 Raw Women’s Champion Alexa Bliss was a guest on the latest episode of PodcastOne’s Chasing Glory with Lilian Garcia. In the interview, Bliss discussed growing up as an athlete, her start in WWE, the challenge of transitioning from cheerleader to WWE Superstar, her move to the main roster and more.

Her journey to WWE:

“My trainer, Mike at the time had told me that he had heard that WWE was having tryouts and so I went online on WWE.com and there was actually a link and it was like, ‘Do you want to be a WWE Superstar?’ I was like ‘Yes I do!’ So I clicked on it and it had all these instructions, it was like, ‘Make a video, do this, do that, send in the video.’ I made a video trying to cut a promo, you know just trying to be as Diva as I could I guess. I sent it in and didn’t think anything would come of it and I got a call from Canyon saying, ‘Hey, we’re actually having a casting call in LA and we’re going to send you out there for a day and like, see how that goes.’

“Went to the casting call, I walked in and Triple H was in there and I was like, ‘Oh my gosh, you’re Triple H!’ Like I totally had that fangirl moment, cause you know watching it and then seeing somebody for the first time and you’re just like, ‘Oh my gosh that’s so cool!’ So I just started talking and talking and talking about like these just terrible wrestling ideas I had. I was like, ‘I want to be like The Great Kabuki, but with the Green Mist I want to blow glitter-I want to spit glitter out!’ Just like all these kinds of things and I’m sure he thought it was a terrible idea.”

“And then I was told I made the thirty day trial after that which was you get in the ring for thirty days and you know, just learn as much as you can and they pick you from there. I got a call on the flight home saying I made it to the thirty-day trial. I was super stoked and then I got a call a week later saying that I wasn’t going to the thirty-day trial and I was like, ‘Oh my gosh!’ Canyon was like, ‘We’re going to sign you. You’re going to move to Florida if you pass medical. Let’s just hope you’re as athletic as you look.’ And I was like, ‘Oh, no pressure.’ So it was basically WWE just kind of taking a chance on me, you know what I mean? Just giving me a chance and I knew I had to run with it as much as I could.”

The challenge of being accepted as a wrestler in WWE:

“I didn’t wrestle before coming here. There’s a respect thing here, you know what I mean? This whole business is based on respect and because I wasn’t wrestling in the indies beforehand, it was very hard to be accepted. It was very very hard because it’s a whole culture here, you know what I mean? You have to learn and it wasn’t the fact that anyone was telling me what to do, it was I had to learn by messing up. And so because I didn’t know these girls, I didn’t know these ways, you know it was very hard to adapt, it was very difficult and I was very lonely for a really long time.

“Coming into NXT, Charlotte took me under her wing immediately and saw you know, how I wasn’t being accepted because of my background, they just saw me as another fitness model coming in and I had never done fitness modeling and it irked me so bad anytime anyone would call me a fitness model, you know what I mean? These girls were so good and they already knew, you know the fundamentals, they knew the psychology, they knew everything that I had just come into this, you know what I mean? And one of the people that helped me a lot through that too was Shaul Guerrero. I became really close with Shaul in NXT and she always had my back for everything and she would help me as much as she could, Charlotte helped me as much as she could and they became my really good friends from that. It was super helpful because you know I had been in a locker room with girls my entire life, but when you go somewhere that you’re not used to, it’s kind of like a little bit of a culture shock.”

Learning how to cut promos:

“My mom helped me a lot. We’d have promo classes in NXT once a week and me and my mom would make it our thing to come up with a promo and it would be fun. So I was always doing these promos in front of my mom and she’d be like, ‘Hmm, that didn’t sound very convincing.’ She would just be like honest, you know what I mean? It was just like in cheer when I would have a routine, she would be like, ‘Stop, start over again, stop, start over again.’ So it’s kind of like the same kind of thing with promos and then we had Dusty (Rhodes) as a promo coach who was amazing. He was brilliant at everything he did. I started getting comfortable in promos when I was partnered with Scott Dawson in NXT. It never debuted on TV, but I was playing his girlfriend in promo classes for like a few months and that’s what really kind of got me comfortable with promos because I was out of the box, I was reenacting, I was reacting off of people, you know?

“When I joined Blake and Murphy, that’s when I was able to really hone in my character as to who Alexa Bliss is because I didn’t have to be in the ring and try to portray a character at the same time and worry about a match and this that and the other. But the fact that I was able to be a valet and to establish a character, work on characters, work on promos, and it helped so much, especially since we were all three really close-me, Blake, and Murphy. I was dating Murphy at the time and it was just like hanging out with friends and being able to do promos and work with people who are just your friends makes it so much easier and I think that’s kind of evolved into what I think about now in promos is like what we said, ‘You don’t just say things, you feel them.’ I’m that psycho person backstage, every promo I still have, even if it’s just two sentences or three pages, I’m backstage, I’m talking to myself, I’m pacing and just saying each thing, dissecting it, being like, ‘Okay now how would I really feel if I just said that?’ And then I say it to myself a couple of times, ‘No that doesn’t sound right.’ And I say it and I’m like, ‘Okay, that’s what clicks. That’s what how I feel.'”

Her friendship with Nia Jax:

“She’s very loud, I’m very quiet. We balance each other out like crazy. We’ll call each other out on crap all the time, we’ll joke around nonstop. I’ve always been friends with people like Nia, I’ve always been. I love Nia, she is amazing. She’s outgoing, she’s funny, we joke around all the time, we quote Bridesmaids like its going out of style, it’s the best! We’re always making each other laugh. Like when one of us is stressed, we always try to bring the other one up, you know? We sing songs on the top of our lungs on car rides. I’m pretty sure we’re the first like real best friends that have ever been on it (Total Divas) so I think that will be very interesting.

“When NXT has tryouts, they have some of the talent to come and help and like work the tryout, tell people where to roll, where to do this, basically boss everyone around. I worked Nia’s tryout and so I remember I was doing cardio while they were having a lunch break and she comes up and she starts talking to me like she knew me forever, like she’s never met a stranger in her life! And I was like, ‘Oh, hello!’ And then we’ve just become really close after that and became best friends shortly after.”