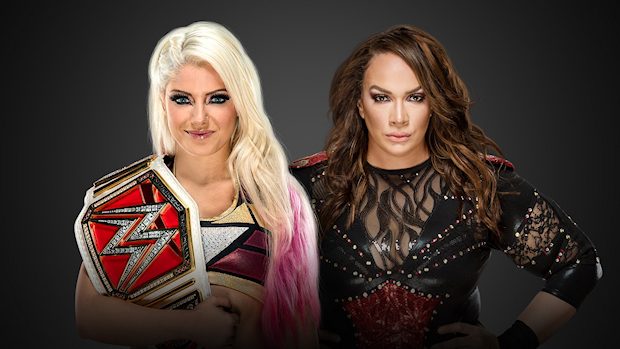 Two days before she ascended a ladder to claim victory in the Women’s Money in the Bank Ladder Match, Alexa Bliss got multiple tattoos.

In a post on social media on June 15, Alexa revealed a new tattoo on her rib cage featuring an inspirational message: “I am enough.”

Bliss then explained to WWE.com what her tattoo means.

“Bliss’ message speaks to an idea of inclusion and self-value, ideals that are so critical for everyone, but especially younger people to latch onto these days. Five Feet of Fury spoke to how important the message is to her and hopes it will inspire others to always remember that they are more than enough.”

This appears to be an attribution to Alexa’s struggles with self-image, specifically a battle with anorexia she had when she was a teenager. However, none of that means much to Nia Jax.

Perhaps feeling a little salty from Bliss cashing in her Money in the Bank contract to become the new Raw Women’s Champion at WWE Money in the Bank, Jax criticized her former friend’s tattoo in this tweet last Friday.

According to Taylor Underwood of WrestlingNews.co, Jax has heat with WWE management over her disparaging tweet.

“We are told that WWE management saw the tweet and there is heat on Jax,” Underwood wrote. “Several readers have also pointed out that Jax and Bliss no longer follow each other on Twitter.”

Since the tweet is still up, Jax probably won’t face any official punishment over it. Often times when a wrestler catches heat from management, their method of punishment is too embarrass the offender on television.

It seems that Bliss got legitimately upset over Nia’s remark. After Jax sent out the tweet, Alexa ‘liked’ several tweets showing her support for the tattoo, and criticizing the 272-pound grappler.

Here are some of the tweets Alexa ‘liked.’

I’m disappointed in Nia…whether they’re still friends irl or not, you’re right in that being a step too far. Publicly attacking something that means so much to Lex and has the potential to inspire people to survive and be confident in themselves. @AlexaBliss_WWE

Alexa’s tattoo “I am enough” is an inspirational tattoo, it speaks to mental issues and not believing in yourself. It’s something I can relate to greatly and to see Nia take a shot at that is really upsetting. You are enough @AlexaBliss_WWE always remember that.

@AlexaBliss_WWE i’m so happy that you got the ‘i am enough’ tattoo. i went through so much with my mental health, so it really means something. i’m upset nia took a shot at it. keep doing you, boo !

you’ve no right to make fun of someone’s mental issues. @AlexaBliss_WWE you’re enough, you gotta remember that. and you deserve no hate. we love and support you no matter what ❤

Nia shading Alexa’s ” I am enough” tattoo is ridiculous. I can relate to that on so many levels.For years i thought i wasn’t worth anything. Wasnt good enough,skinny enough,cute enough. Taking shots at something so personal is pathetic. @AlexaBliss_WWE

The irony of calling someone else a “crappy human” and then making fun of her mental health issues. Absolutely disgusting. Don’t let her get you down @AlexaBliss_WWE ❤️

It’s very revolting for someone to make fun of your tattoo that shows how much you overcame your struggles of anorexia, what kind of human being would say such a thing like that.
We all need to give our love and support to @AlexaBliss_WWE for being so inspirational💕

Honestly a lot of people with mental health issues always doubt if they’re enough, constantly think they’re not and struggle with it so @AlexaBliss_WWE tattoo saying I’m enough is important. It’s important for people to realize they are and remember that so to shade that? 🖕

Bliss got her ink done at a tattoo parlor in Chicago, Illinois and went with longtime friend Erin Gal, who documented their trip on Instagram.

Bliss got four tattoos, including a matching tattoo with Gal. Gal had initials tattooed on her left ankle and then Alexa did the same.

Bliss posted a photo of herself with Gal after getting the tattoos and revealed that she now has six.

Jax’s tweet pissed off Gal, who responded with the following:

Can you IMAGINE being the type of woman that mocks another woman’s triumph over an at times life threatening struggle? Same. https://t.co/iV5UumO792

Alexa ‘liked’ Gal’s tweet, as well as these tweets from another hometown friend showing her support.

@AlexaBliss_WWE has been very vocal about her issues from the past. She has inspired many to seek help and has proven even a Goddess can be insecure. Her getting that tattoo was a reminder for whenever she gets in a dark place to remember who she is and how far she has come.

For everyone out there imagine having a best friend someone you look to as family and love so much think anything negative towards themselves. Then they get a tattoo just to maybe help remind them that they are ENOUGH and then someone goes out and mocks it..

To anyone out there who has ever felt that you’re less than or you’re unhappy with yourself go find help, whether that be in family, friends or a doctor. Don’t let anyone let you feel ashamed for your feelings or thoughts! #love