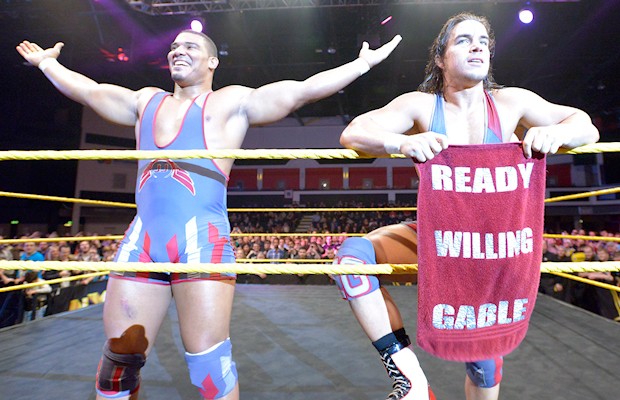 – WWE Women’s Champion Charlotte appears in the latest WWE Network Pick of the Week video to hype the new “Table For 3” episode with her dad Ric Flair, uncle Arn Anderson and Tully Blanchard:

– The WWE website recently spoke with WWE NXT Tag Team Champions American Alpha about their success. Below are a few highlights:

Chad Gable on the “warrior’s mentality” that won them gold: “That warrior’s mentality comes from amateur wrestling. We’ve experienced a lot of the exact same highs and lows, in competitive sports and in life, so it just works out that we are on the same page about most things.”

Jason Jordan on their crowd reactions and chants after winning the titles: “The crowd reactions have meant the world to us. We understand how difficult it can sometimes be to earn the respect and win over our NXT Universe. That’s what made it so special and emotional when they chanted, ‘You deserve it!’”

– Several WWE Superstars have been tweeting to celebrate Make-A-Wish and World Wish Day. Below are a few comments from Vince McMahon, John Cena, The Bella Twins and WWE World Heavyweight Champion Roman Reigns:

.@WWE is a proud supporter of @MakeAWish. On #WorldWishDay, I am thankful for those who make wishes possible. pic.twitter.com/jS5UdqaYJ6

No greater reminder of why we perform in a @WWE ring. @MakeAWish. #WorldWishDay https://t.co/desEmxoq5s pic.twitter.com/YG5RAXYRlL

Seeing their smiles make every bump and bruise worth it. So happy to support #WorldWishDay!! https://t.co/Zt7mTuEO64 pic.twitter.com/BtVGqYJvyB