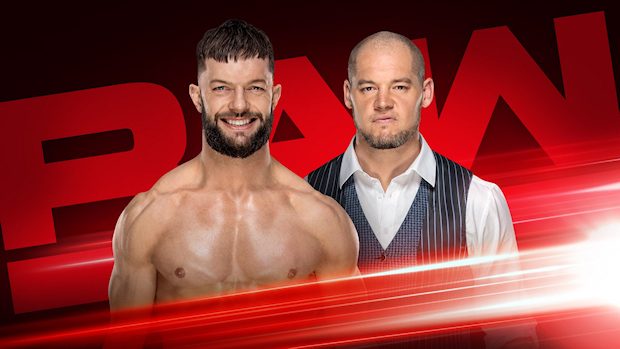 As seen this past Monday night on Raw, “Constable” Baron Corbin once again teased Finn Balor for being “small.”

Early in the show, there was a segment where Balor and Chad Gable were chatting backstage about WWE’s announcement of the first all-women’s pay-per-view event, WWE Evolution, when staffers start walking by with Balor’s belongings. One man said Corbin ordered them to move Balor’s belongings into a new locker room. The guy walks Balor over to a plastic playhouse for kids, decorated with one of Balor’s T-shirts and some other gimmicks.

Corbin walks up and says after Balor’s win at WWE Extreme Rules (over him), he’s just too big of a Superstar to not have his own dressing room and this one is perfect for his size. Balor says Corbin is a great “Constable” and he’s always wanted his own funhouse. Corbin tells him to enjoy his funhouse and enjoy tonight’s match with Drew McIntyre before storming off.

Behind-the-scenes, one WWE creative writer saw a social media post Balor did on Sunday of him standing in front a “small house” in Venice Beach, California. The writer proposed they play off that for their angle of Corbin mocking Balor for being “small.”

Balor played up the joke as he posted this photo during Raw of “Finn’s Fun House.”

WWE’s angle of Balor being teased for being “small” pretty much comes from Vince McMahon. Dave Meltzer noted last week in the Wrestling Observer Newsletter that Ric Flair got heat from WWE officials for saying on his podcast that Balor is too small to main event WrestleMania, noting that is something McMahon thinks too, but that it shouldn’t be publicly said.

Flair made those comments two years ago this week after Balor made his Raw roster debut and beat Roman Reigns to earn a Universal Championship Match at SummerSlam.

“If I’m looking at what’s going to draw money, what I would pay to see, I would pay to see Dolph against Ambrose before I’d pay to see Finn Balor against Seth Rollins, so I think it’s phenomenal. I think Finn Bálor is great too. I just think you’ve got a legitimate heavyweight in Seth Rollins, a legitimate heavyweight in Roman Reigns, and I don’t think we’ll ever see the day, and I could be totally wrong, that a cruiserweight will ever main event a WrestleMania,” Flair said.

“And that’s what you have to look at, I think, in the total picture of the [professional wrestling] business.”

Flair added, “He’s of that [cruiserweight] size. I mean, if you look at the two of them side by side, he [has] got a great physique, gosh, but he’s smaller. Yeah, I don’t think he weighs 200 pounds.”

Flair’s comments actually led to him giving up his podcast.

“Both Ric Flair and Bret Hart gave up podcasts partially because any frank talk on WWE could have led to repercussions for Flair on his daughter and for Hart on his niece. It could be something a simple as Flair making a statement that he felt Finn Balor was too small to be in the main event of WrestleMania, the irony being that was a point Vince McMahon himself has very clearly decided as well, but you’re not supposed to say it. And he was given a speech about it to the point he decided to drop his podcast,” Meltzer wrote.

WWE began pointing out Balor’s size in May 2017 during a match on Raw where Reigns avenged his loss to Balor from the year before.

On commentary, there were a few references to Balor facing the much larger Reigns. That all came from McMahon, who directed the announce team to point out his lack of size.

McMahon realized then that Balor’s size or lack thereof is going to have to play into his role in WWE since most of the company’s wrestlers are bigger than him.

Billed at 5’11” and 190 pounds by WWE, Balor will often be the smallest wrestler in the ring since he’s not facing the Superstars of 205 Live. However, even those numbers are exaggerated.

Balor has said in the past that his weight is usually between 178 and 181 pounds. Furthermore, the average guess of his real height by CelebHeights.com users is 5’9″.

The billed heights of WWE wrestlers are often inflated by two inches, so Balor’s real height being 5’9″ is probably true.