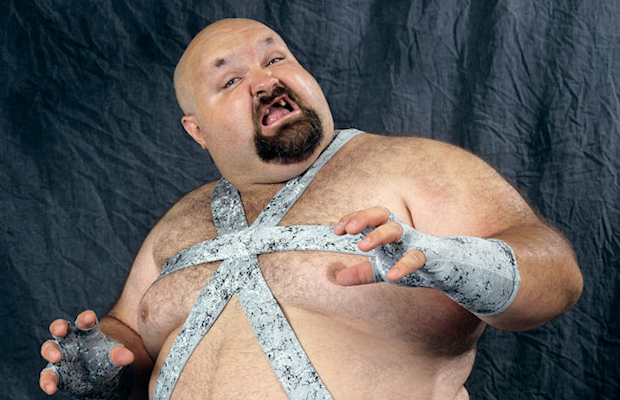 Mike Shaw, who portrayed a number of personas throughout his professional wrestling career, including Makhan Singh, Norman the Lunatic and most famously, the gelatinous Bastion Booger, died of a heart attack on September 10, 2010 at his home in Skandia, Michigan. He was 53-years-old.

After competing for World Championship Wrestling and numerous independent wrestling organizations, Shaw arrived onto the World Wrestling Federation scene in April 1993 as Friar Ferguson, a “mad monk.” WWE, via WWE Encyclopedia, described his character as: “Unlike most men of the cloth, Friar Ferguson, enjoying inflicting pain on people. He loved it so much, in fact that he oftentimes broke out into dance whenever ge felled an opponent. His love for brutality wasn’t the only characteristic that set him apart from his fellow religious servants. Unlike most friars, Ferguson completely ignored his vow of poverty, spending staggering amounts of money at the buffet line.”

After only a few weeks, Ferguson disappeared from the World Wrestling Federation amidst controversy. The sports-entertainment organization received negative feedback from the Catholic Church of New York, leading to the character’s removal.

Shaw resurfaced in June as the hygienically-challenged Bastion Booger, a character of an unkempt, slovenly and gluttonous gargoyle-like man who competed in dingy singlets tailored to give him the appearance of a hunchback. His grotesque appearance almost equaled his disgusting behavior toward opponents and fans. Vince McMahon once said, “Bastion Booger is the only person I know who refers to his nose as a snack dispenser.” One night, “The Booger Man” grabbed an ice cream cone from a young child in the crowd, turned to the boy and shoved the entire tasty treat in his mouth. As the boy cried in front of a capacity crowd, the revolting blob laughed all the way to the ring.

Booger had a short-lived alliance with Bam Bam Bigelow, which dissolved on an episode of Monday Night Raw when he planted a passionate kiss on Bigelow’s valet, Luna Vachon. After competing as a babyface for a few months, Booger would part ways with the WWF in 1994 and return to parts unknown.

“I think the Booger character would have worked if it got over as a heel, but my heart wasn’t into it,” Shaw confessed to Scott Teal in an interview in 1998. “I didn’t like the character. I didn’t like the outfit. Don’t get me wrong. I was happy to be in the WWF. It was something I wanted to do my whole career. I made a good living there.”

Though some thought Booger would remain dormant forever, he shocked the world when he arrived at the Raw 15th Anniversary show, over a decade after his last appearance.