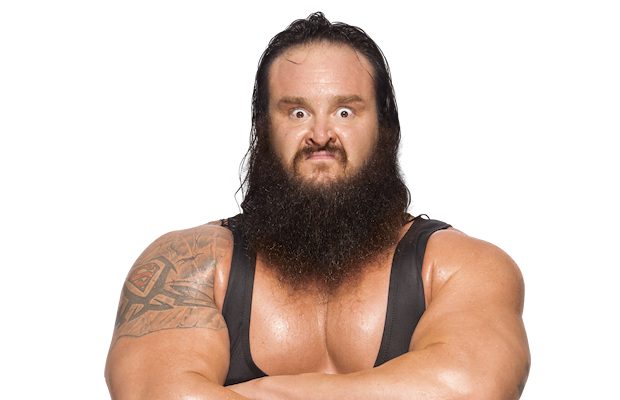 At a WWE NXT live event in October 2014 in Orlando, JoJo brought out Braun Strowman, who at 6’8′ and 385 pounds is a mountain of a man. Speaking on the microphone, he let fans know that monsters are real and on no uncertain terms, he is putting the entire locker room on notice.

Vince McMahon Losing Interest In Braun Strowman ▸
Mar. 28, 2016 – Although Braun Strowman competed in the main event of Raw last week (he beat Dean Ambrose via disqualification), his standing in the organization is beginning to decline . . .

Video Of Fan Assaulting Braun Strowman At A WWE Event ▸
A fan was escorted out of the Wells Fargo Arena in Philadelphia, Pennsylvania after striking Braun Strowman in the face during a Raw dark match on Mar. 22. See video from the incident . . .

Braun Strowman Appeared On WWE TV As A Rosebud ▸
The more eagle-eyed viewers may have recognized the kind eyes of Braun Strowman from his previous appearances on WWE television. Back when Adam Rose was a thing with a catchy . . .

Check Out Pre-WWE Photos Of Braun Strowman ▸
Braun Strowman on PWPIX.net, your go-to source for the best pics of the huge WWE star . . .

Who Is Braun Strowman? Born Adam Scherr on September 6, 1983 in Sherrills Ford, North Carolina, this monster of a man was a professional strongman competitor prior to joining WWE.

On November 5, 2011, Scherr won the NAS US Amateur National Championships to earn an American Strongman Corporation (ASC) Professional Card. On March 4, 2012, Scherr won the Arnold Amateur Strongman World Championships, which took place during the Arnold Sports Festival alongside the 2012 Arnold Strongman Classic. This win earned Scherr an invite to the 2013 Arnold Strongman Classic. He took part in the SCL North American Championships on July 8, 2012, where he finished in fifth place. He also participated in the Giants Live Poland event on July 21, 2012, where he finished in seventh place. In 2013, Adam Scherr underwent a major career shift and took the leap many competitors from other sports took: He joined WWE to become a professional wrestler. He began training at the WWE Performance Center in Orlando, Florida when it opened in July 2013. On December 19, 2014, he made his wrestling debut under the name Braun Stowman at a non-televised NXT live event in Jacksonville, Florida, beating Chad Gable. He wrestled his first match in front of a WWE crowd on June 2, 2015 in Houston, Texas at the Toyota Center. Competing in a dark match before that evening’s WWE Main Event taping, he pinned a wrestler who was not introduced to the audience by name. With his name tweaked to Braun Strowman, Adam Scherr made his WWE television debut on the August 24, 2015 edition of Raw. Coming to the aid of Bray Wyatt and Luke Harper, he annihilated Dean Ambrose and Roman Reigns. Wyatt then declared Strowman as his newest follower and the “Black Sheep” of Sister Abigail.

In the weeks after Strowman’s unforgettable debut, the behemoth proved to be an absolute force to be reckoned with, destroying anybody who crossed his path. He competed in his first televised match on the August 31, 2015 episode of Raw, beating Ambrose via disqualification. At Night of Champions on September 20, 2015, Strowman, Wyatt and Harper beat Ambrose, Reigns and their mystery partner, Chris Jericho, in a Six-Man Tag Team Match. The frightening Strowman squeezed the life out of Jericho with his incapacitating submission hold, causing the veteran WWE Superstar to pass out and lose the contest for his team. The following night on Raw, the warfare between both groups continued when Randy Orton joined forces with Reigns and Ambrose to fight off Strowman, Wyatt and Harper.

Strowman has proven to be a huge factor in The Wyatt Family’s clashes as few WWE Superstars have been able to overthrow the monstrous competitor. It was partly because of him that The Wyatt Family was able to annihilate the extreme group of Tommy Dreamer, Rhyno and The Dudley Boyz in an 8-Man Elimination Tables Match at WWE TLC on December 13, 2015.

Strowman had a strong showing in the 2016 Royal Rumble Match on January 24, eliminating five WWE Superstars (the most of any competitor, including Big Show and Demon Kane) before being eliminated by Brock Lesnar. Despite being eliminated, he helped Bray Wyatt launch an assault on Lesnar that would result in “The Beast Incarnate” getting tossed over the top rope. According to Wrestling Observer Newsletter editor Dave Meltzer, Strowman was “put over as a monster” in the contest.

On the February 15, 2016 episode of Raw, The Wyatt Family’s behemoth battled Big Show in a monstrous main event — the first of Strowman’s career. He lost to “The World’s Largest Athlete” after members of The Wyatt Family interfered in the contest and attacked Show. Afterwards, they continued their attack on him until Demon Kane and Ryback came to his rescue.

It remains to be seen if any WWE Superstar can stop Braun Strowman, but one thing is for certain: Until proven otherwise, The New Face of Destruction strengthens Bray Wyatt’s reign of terror to a fearsome degree.