D-Generation X To Be Inducted Into WWE Hall of Fame Class of 2019, Triple H Reacts To Chyna’s Induction 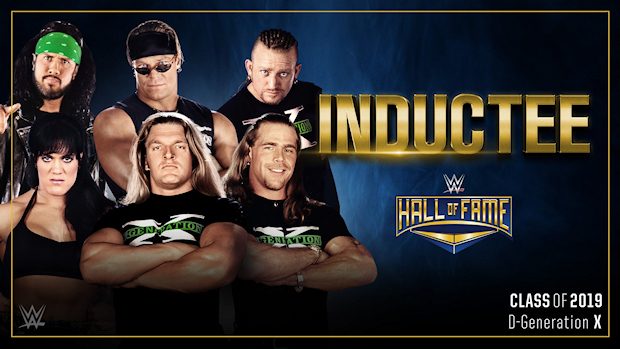 WWE has finally made their first official announcement for this year’s Hall of Fame class.

WWE announced via ESPN today that D-Generation X will be inducted into the WWE Hall of Fame Class of 2019. The first two versions of DX will be recognized as a collective group of six. They are Triple H, Shawn Michaels, Road Dogg, Billy Gunn, X-Pac and the late Chyna.

“I think it’s the most meaningful for us all to go in together and to be recognized together,” Triple H told ESPN about both versions of D-X going into the Hall of Fame. “Because I think both groups were [just] as impactful.”

This will be Michaels’ second induction and the first for Triple H, Chyna, Road Dogg, Gunn, and X-Pac.

Among this group of six entering the WWE Hall of Fame together, Chyna’s inclusion in the Hall of Fame class is likely to garner the most attention. Joanie “Chyna” Laurer left WWE in 2001 under tense circumstances and never returned. Her post-WWE career included acting, time in the reality television world and several forays into the adult entertainment industry. She died on April 20, 2016.

With the recent push toward expanding the spotlight on women’s wrestling, fans have clamored for Chyna’s role in WWE history to be better recognized, and her inclusion as part of DX’s induction into the Hall of Fame is a major step forward in that regard.

“Look, people believe what they want to believe. When I said a few years ago on the Austin or show, or whatever you want to call it, complexities around it,” Triple H said.

“But absolutely, definitely deserves to be in there. It’d be tough to pick a female that was more impactful on the business. She did something that was completely so out of left field that it wasn’t even being considered when we first brought it up for her to come in. It wasn’t even a consideration … it wasn’t an easy thing, and against all she did all of that. She earned everybody’s trust. She won over the fans. She won over the boys. She did all of it.

“From that standpoint, absolutely 100 percent deserves to be in the Hall of Fame, and should probably be more than once — as a group, but individually as well. There’s more complexity to that than meets the eye, but here we are. I’m just happy that it’s here. I’m happy for her family, the people that she was close to, that hopefully this is super-meaningful to them. I know it would be to her. It’s a great thing — very deserving.”

The 2019 WWE Hall of Fame Induction Ceremony takes place on Saturday, April 6, at the Barclays Center in Brooklyn, New York during WrestleMania 35 Week. Tickets for the ceremony will be available starting Friday at 12 p.m. ET.