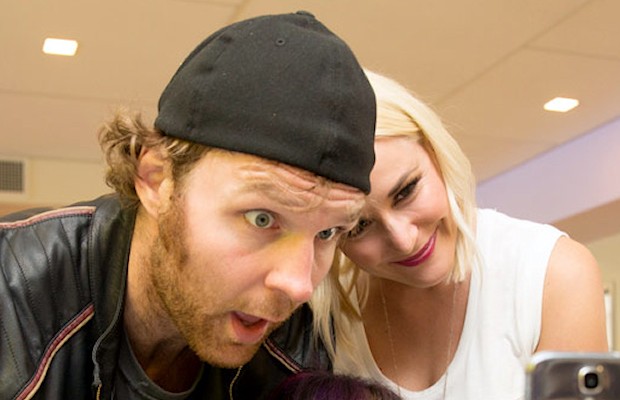 Is Dean Ambrose dating WWE announcer Renee Young dating? Based on numerous photographs that have surfaced online of the two together outside of WWE arena, it would certainly appear to be the case.

Photos Of Dean Ambrose And Renee Young Out Together ▸

The WWE talents, however, are not a couple, as they consider themselves single. Their relationship is a ‘friends with benefits’ situation.

As one of WWE’s top Superstars, Ambrose is naturally among the most yearned for wrestlers among female fans. A search for “The Lunatic Fringe” on Google reveals many suggestions concerning his dating life

Is Renee Young Trolling Fans Over Her Relationship With Dean Ambrose?

After assaulting The Authority with a hot dog cart (along with everything in it) on Raw in Brooklyn, New York, on Oct. 6, Dean Ambrose hopped in a cab with Renee Young.

Although the two often travel together and obviously hang out a lot, it is said that they don’t consider themselves boyfriend and girlfriend. Rather, it’s a “friends with benefits” situation. It can, however, be said that Dean Ambrose loves Philadelphia.

Ambrose made Philadelphia his home for two years while he was wrestling for Combat Zone Wrestling and other independent promotions.

After the following night’s SmackDown taping in Philadelphia, Ambrose grabbed the microphone and told the fans that Philadelphia was not John Cena’s town, but that it was his. He also said that he would be at the Wells Fargo Center again Thursday to cheer on the Flyers during their home opener against the New Jersey Devils.

While Young doesn’t acknowledge her relationship with Ambrose, she implied being with him at that game with this photo on Instagram.

This led to number of harsh messages from fans of Ambrose and she eventually deleted the photo.

The harsh messages are nothing new for her as she has been getting a lot of heat on social media over her relationship with the popular WWE Superstar for months now; it flares up whenever a new photo of the two being spotted together outside of a WWE venue surfaces online. It definitely looks like she was just having some fun trolling that group of fans.

Dean Ambrose Opens Up About His Relationship With Renee Young

September 2, 2015 – Dean Ambrose says his WWE broadcaster girlfriend Renee Young is too good for him.

During an interview with the Gorilla Position podcast, Ambrose deflected a question about maintaining a relationship on the road before praising Young as the “most beautiful, most tremendous girl in the world.”

“It’s going to be a big hot seller, playing as Renee Young. Or I may play against Renee Young.”

Ambrose added, “Nah, I mean . . . I wouldn’t be with anything less than the optimal, most beautiful, most tremendous girl in the world.

“The bottom line is, she’s far too good for me.

“But it’s far too late and I’ve got my claws stuck into her now, she can’t go anywhere now.”

Ambrose also suggested they were in it for the long haul.

He said, “Would a girl like that want to be with anyone but the legendary Dean Ambrose?”

Related ItemsFeatured
Next Story → Who Is Layla Dating?