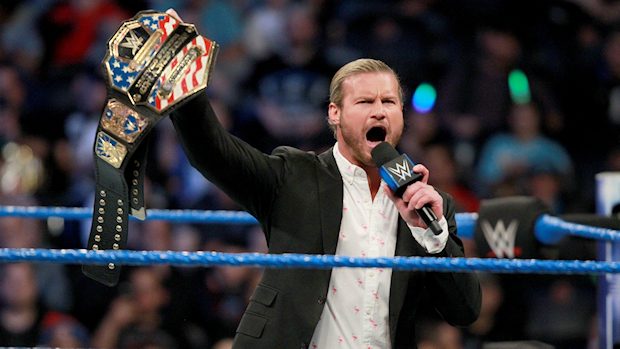 Dolph then screamed at the crowd that they don’t deserve him, and he told them that if they want a memorable moment, he has one last one for them. Ziggler then proceeded to lay the United States Championship down in the middle of the ring and walked off in silence.

Here is WWE.com’s recap of the segment, which is labeled as “bizarre” and “odd.

Fresh off his United States Championship victory over former titleholder Baron Corbin and Bobby Roode at WWE Clash of Champions, Dolph Ziggler threw a Championship Celebration on SmackDown LIVE that was a complete retrospective of his decorated history in WWE, which includes 10 championship wins.

After reminding the WWE Universe of what he’s done and who he is through the vintage clips, Ziggler claimed the WWE Universe didn’t deserve him, then took the United States Championship off his shoulder, placed it in the middle of the ring and left without saying anything in a very odd moment.

There have been rumors that Ziggler would be leaving WWE at the end of the year, but none of those have been substantiated as of yet. WWE still recognizes Ziggler as the United States Champion.

In a backstage update on the angle, it appears that Ziggler will be off television for at least a little while to sell it.

WWE sources have told PWInsider.com that Ziggler will not be appearing on SmackDown LIVE for the time being, but will continue to wrestle on house shows.