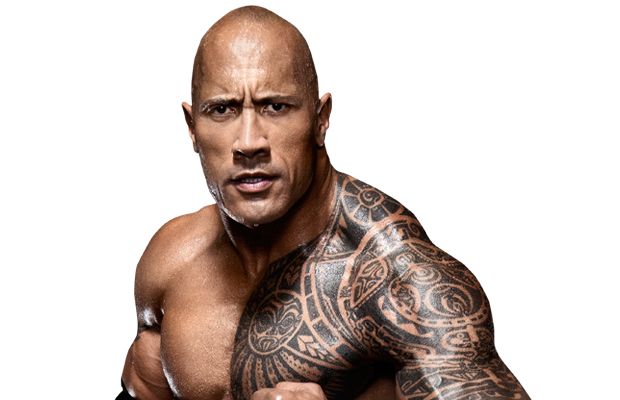 Dwayne Johnson grew up in a family of wrestling royalty. His father, future WWE Hall of Famer Rocky Johnson, was one of the most popular talents in the professional wrestling industry. His maternal grandfather, future WWE Hall of Famer High Chief Peter Maivia, was the patriarch of the famous Maivia family, one of professional wrestling’s toughest competitors who also appeared in the 1967 James Bond classic, You Only Live Twice.

Because he idolized his father, grandfather and WWE Hall of Famers Andre the Giant, Hulk Hogan, Jimmy “Superfly” Snuka and “Nature Boy” Ric Flair, it was only natural Dwayne thought about a life in sports and entertainment. After a childhood of mischief, Dwayne was an All-American on the gridiron at Freedom High School in Bethlehem, Pennsylvania.

Trained by his father, along with Pat Patterson, Dwayne exceeded all expectations and soon cut his teeth in the United States Wrestling Association. While there, he learned his craft and stared across the ring at Jerry Lawler.

At the 1996 Survivor Series, a capacity Madison Square Garden crowd witnessed the third-generation Superstar make his way to the ring. As a tribute to his grandfather and father, he chose the name Rocky Maivia. As the next Maivia emerged the sole survivor, the Superstar was set to take the sports-entertainment world by storm. Within three months of his debut, Rocky captured the Intercontinental Championship when he defeated Hunter Hearst Helmsley on a special Thursday edition of Raw.

As the tone of professional wrestling changed, the fans’ cheers suddenly turned to jeers as they chanted “Rocky Sucks” and “Die Rocky Die.” Shortening his name to “The Rock” and referring to himself in the third person, he became one of the most detested figures in all of World Wrestling Entertainment and a member of The Nation of Domination. The anger from the fans fueled his fire to succeed and his undiluted arrogance enraged crowds everywhere. The Rock dubbed himself “The People’s Champion” and made it clear he would reach the top of WWE by any means necessary. The Rock soon physically removed Farooq as Nation leader and became the self-appointed ruled of the group, citing the term leader was beneath him. In the summer of 1998, The Nation began a fierce rivalry against D-Generation X to decide which was the most dominant faction in WWE. The two leaders met in the King of the Ring tournament. After The Rock pinned rival Triple H, both crews threw fists of fury as pure bedlam flooded the ring.

The Rock’s career gained momentum and he left The Nation to construct his own path to glory. He invited all Superstars to “Go One-on-One with The Great One,” and in the process became the object of Mr. McMahon’s intense scrutiny. “The People’s Champion” went into the Survivor Series’ 16-man tournament for the WWE Championship a heavy favorite. In the tournament finals against Mankind, the 26-year-old showed the perseverance and poise of a seasoned veteran. After he locked-in the Sharpshooter, the bell unexpectedly rang and their collusion became known. The McMahons courted The Rock and made “The People’s Champion,” “The Corporate Champion.” A confused Mankind got his final explanation courtesy of a blindside beating by the newly crowned champion. This event led to a string of classic clashes between the two, and though Mankind temporarily regained the championship, the sight of a jubilant Mankind brought out an even more barbarous “Brahma Bull.” Their most sadistic bout was the Last Man Standing Match at St. Valentine’s Day Massacre. When neither man answered the ten-count, the match was ruled a draw and they met the next night on Raw in a Ladder Match, won by The Rock. Afterward, “The Most Electrifying Man in Sports-Entertainment” put his problems with Mankind and focused on a new enemy.

At WrestleMania XV, “The Great One” took on the anti-establishment “Stone Cold” Steve Austin for the WWE Championship. The carnage in Philadelphia proved to be the beginning of one of the greatest rivalries in WWE history. Despite a loss to the “Texas Rattlesnake,” The Rock truly became “The People’s Champion” when he left The Corporation and went his own way. As the mystique of The Rock grew, audiences continued to marvel at his undeniable charisma and wildly entertaining promos. As he entered the summer of 1999, he resumed war with a familiar foe, Triple H. When former enemy Mankind was looking for a friend, he treated The Rock to a parade of his past on an episode of “Rock: This is Your Life.” In the process, the two joined forces as The Rock N’ Sock Connection and surprised everyone with their continuity and resolve when they defeated Undertaker and Big Show for the World Tag Team Championship.

Latest Dwayne “Rock” Johnson News, Photos and Videos →
Dwayne “The Rock” Johnson on PWPIX.net, your go-to source for the latest news, rumors, photos and videos on The Most Electrifying Man in All of Entertainment…