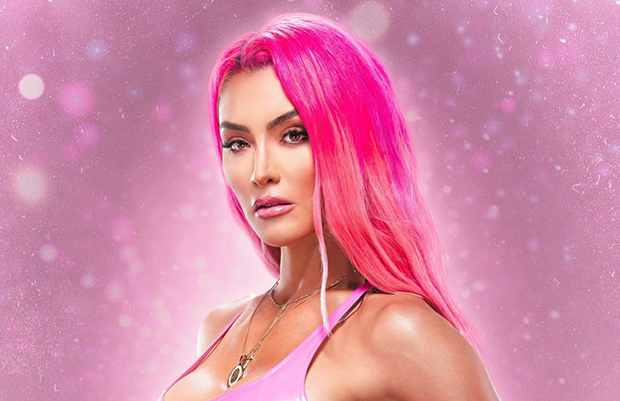 It may have been Eva Marie’s bright red hair that first drew the attention of members of the WWE Universe, but her penchant for controversy is what has everyone talking.

The Hottest Photos Of Eva Marie →
Eva Marie proves why she’s among the finest women in WWE in these 70 hot photos.

The Breast Of Eva Marie →
Eva Marie has great boobs and she’s not afraid to flaunt ’em. Check out these 20 hot photos of the WWE Superstar showing off her tits.

A Look At Eva Marie’s Scandalous Past

As seen on Total Divas on E!, Eva Marie’s scandalous past came back to haunt her in a big way.

During a Season 2 episode, Cameron saw fit to punish Eva Marie for an imagined slight by passing her racy, pre-WWE modeling images throughout the men’s locker room (the offense in question was a mere case of swelling ego on the part of the redheaded beauty). The photographs, of course, immediately went viral and Summer Rae is the only WWE Diva to discover the source.

“If they’re the photos that I think they are, they’re disgusting,” Eva Marie remarked to Summer Rae upon being informed of Cameron’s act. She continued, “First of all, say it to my face. Don’t be a little rat and run around to everyone that I work with. If she has a problem, that’s fine, like come and address me. I just can’t believe it, that I don’t know, that she stooped to like that level.”

The crimson-haired grappler then adds in her on-camera confession, “I’m completely shocked and so caught off-guard because I don’t really know how many people she showed, but she definitely has no idea by just bringing them and showing these photos that I did when I was like twenty, how hurtful it is to me. She’s always saying that she tells it how it is, she comes up to your face. You know, she doesn’t need to talk behind your back, give me a break.”

Upon being confronted, Cameron remains remarkably contemptuous in the face of Eva Marie’s anger. Although Naomi convinces Cameron to say sorry for her malicious actions, Eva Marie refuses the half-baked apology and tosses it back in the Funkadactyl’s face.

Some members of the WWE Universe are under the impression that Eva Marie has appeared naked for Playboy or a similar publication, but that is not the case. In regards to the scandalous photos in question, Eva Marie with her natural black hair, appeared nude before an independent photographer several years ago. In some photos, she is shown putting her bare ass on display as she pulls her string bikini down below her crotch. In other images from the very same photo shoot, Eva Marie appears in a nude but strategically covered manner; her bare breasts are slightly visible through a yellow mesh top and in another shot, she appears topless with her hands placed over her breasts. This is believed to be Eva’s sole pornographic photo shoot.

With Eva Marie appearing highly remorseful about her past, don’t expect the curvaceous bombshell to ever appear naked for public consumption again.