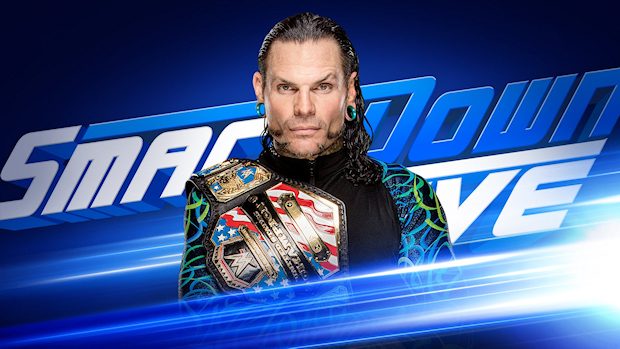 In addition to Asuka going one-on-one with James Ellsworth, three more matches have been made official for tonight’s episode of SmackDown LIVE from CenturyLink Center in Omaha, Nebraska. According to WWE.com, they are:

Hardy was scheduled to defend his title against Shinsuke Nakamura last week before Nakamura got pulled from the show as a result of getting bit by a dog. Eric Young answered Hardy’s open challenge on the show, but it turned into Hardy and The Usos vs. SAnitY, which the babyfaces won.

In a match originally scheduled for last week, Lynch will take on Royce. Lynch instead faced Sonya Deville.

A few hours before SmackDown LIVE went on the air last week, WWE posted a video on YouTube of Dasha Fuentes acknowledging the change during a backstage interview with Lynch.

After bumping Deville into Mandy Rose, who had already interfered in the match, Lynch trapped Sonya in the Dis-arm-her for the tapout victory.

Last Tuesday, the WWE Universe was stunned by the surprise reunion of Team Hell No, as Kane returned to help Bryan fend off The Bludgeon Brothers, earning the two a SmackDown Tag Team Championship Match against Harper and Rowan at WWE Extreme Rules in the process. WWE.com has announced that Team Hell No will kick off tonight’s show.

And finally, The New Day will face off in the First Annual Third of July Pancake Eating Contest. Here is what WWE.com has to say about this:

“Before the grills are ignited and the hot dogs are cooked on the Fourth of July, The New Day are ready to scarf down a heaping helping of their favorite breakfast treats in the First Annual Third of July Pancake Eating Contest on SmackDown LIVE.

“Kofi Kingston, Xavier Woods and Big E will be competing against each other to see who can eat the most pancakes in the start of a new tradition. Who will emerge victorious? Will they have any room for barbecue tomorrow? Find out on SmackDown LIVE, tonight at 8/7 C on USA Network!”