Full Details on the Next TNA Hall of Fame Induction, Earl Hebner Comments 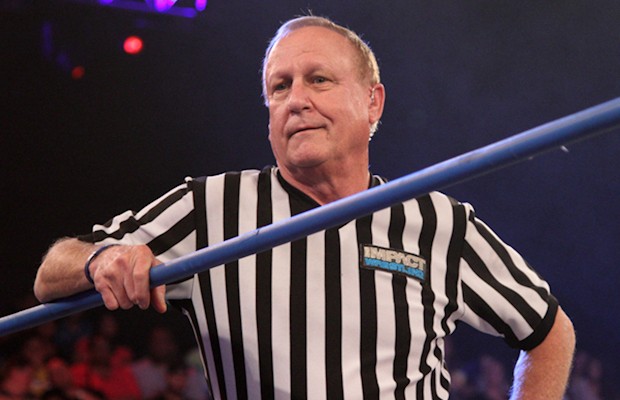 NASHVILLE, TN (Sept. 14, 2015) – For 27 years professional wrestling referee Earl Hebner has entered millions of living rooms across the globe every week, officiating the wildest and most memorable matches and main events of wrestling’s top promotions. On Saturday, Oct. 3, in front of family, friends and fans in his home state of Virginia, Hebner, the most famous professional referee in the world, will be inducted into the TNA Hall of Fame.

“Earl Hebner is not only one of the most recognizable personalities in professional wrestling, his passion for the sport, in-ring management skills, and ability to entertain audiences has set the standard by which all professional wrestling referees are measured,” said TNA President Dixie Carter. “ It is an honor to have Earl as part of the TNA family and as the newest member of the illustrious TNA Hall of Fame.”

On Sunday, Oct. 4, during TNA’s biggest night of the year, the Bound For Glory Pay-Per-View event, a special segment will be dedicated to Earl’s TNA Hall of Fame induction and will feature career highlights and portions of his induction ceremony from the previous night.

Hebner will be the sixth inductee into the TNA Hall of Fame, joining Sting, Kurt Angle, Bully Ray, Devon and Jeff Jarrett. His TNA Hall of Fame induction marks the first time a referee of any major professional wrestling organization has become a member of the promotion’s Hall of Fame.

“When I received the call from John Gaburick (TNA’s Executive Vice President of Television and Talent Relations) and he told me I am being inducted into the TNA Hall of Fame, I was stunned and my eyes welled up with tears,” said Hebner. “I’ve been working for 37 years for this incredible honor. It is rare for a referee in any sport to be recognized in this way, and I am proud TNA is recognizing me as the first referee to ever be inducted into a professional wrestling Hall of Fame.”

Hebner fell in love with professional wrestling during his teenage years while working concessions at the Richmond, Va., fairgrounds, where local and regional promotions would run shows every Friday night. He first became involved in professional wrestling by volunteering on the ring crew. Hebner’s foray into refereeing came about by happenstance when a referee fell ill and Earl was asked to fill in on a moment’s notice. Hebner went on to referee for Jim Crockett Promotions, and in the late 80s he made his debut with World Wrestling Federation, when he replaced his twin brother, Dave, mid-match and influenced the outcome of a title bout. Hebner made his TNA debut in 2006 where he has served as Senior Official, managing TNA’s other referees, including son Brian.

TNA Wrestling presents The Road to Bound For Glory Tour
Featuring the Stars and Knockouts of IMPACT WRESTLING
Saturday, Oct. 3 at 7:30 p.m.
Salem, Va. – The Salem Civic Center
Tickets start at $15 and are available at ticketmaster.com