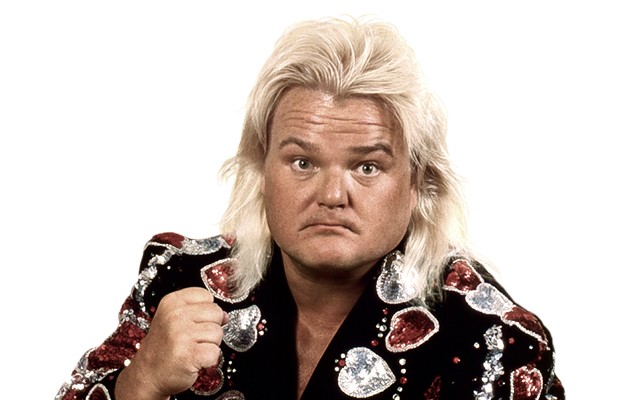 A second-generation wrestler, Greg “The Hammer” Valentine would go on to compete in some of the most ferocious matches in the history of the sport. His teachers — the great Johnny Valentine, the rugged Stu Hart, and the unpredictable Sheik — would not accept anything less.

Greg Valentine would debut in 1968 and spend the early part of the 1970s developing one of the most crippling versions of the Figure-Four Leglock. In 1976 he arrived in Mid-Atlantic Championship Wrestling and formed a successful tag team with “Nature Boy” Ric Flair. The two soon defeated the Minnesota Wrecking Crew for the NWA World Tag Team Championship. It was here that Valentine also feuded with Wahoo McDaniel over the Mid-Atlantic Heavyweight Championship, breaking the Chief’s leg. Adding insult to injury, Valentine began taunting his injured opponent by wearing a shirt that read, “I Broke Wahoo’s Leg.” Valentine eventually turned on Flair, and in 1980 he defeated him for the United States Championship. In 1981 Valentine briefly appeared in the WWWF, guided by the Grand Wizard, to battle then champion Bob Backlund, as well as a feud with Chief Jay Strongbow. Returning to the NWA, Valentine renewed his feuds with Wahoo McDaniel and “Rowdy Roddy” Piper over the United States Championship. It was at the first Starrcade that Valentine and Piper would fight in a Dog Collar match, participating in one of the most violent contests wrestling has ever seen.

Now known as “The Hammer,” Valentine made his World Wrestling Federation debut in 1984 and began dropping a crushing elbow across the throats of his opponents. On September 24, Valentine defeated Tito Santana to win the coveted Intercontinental Championship. As a result, “The Hammer” engaged in a brutal near one-year feud with Santana over the belt. The battles were so fierce that Santana got his revenge. After the loss, an irate Valentine took the title belt and smashed it against the cage, resulting in a new championship belt being created.

“The Hammer” then moved to the tag team division and formed a tandem with newcomer Tito Santana, The Dream Team. The two only showed great teamwork, and with Johnny Valiant as their manager, it was only a matter of time before they would wear tag team gold. On August 24, 1985, the duo defeated the U.S. Express — Barry Windham and Mike Rotundo. The Dream Team enjoyed a near seven-month title reign until they came up against a hungry British Bulldogs team at WrestleMania 2. Making the most of their last title shot, the Bulldogs defeated Valentine and Beefcake in front of a capacity Rosemont Horizon crowd. In April 1987, the two split, and Beefcake was replaced by Canadian strongman Dino Bravo. As a slap in the face to Beefcake, the team was called The New Dream Team. After a short run the two parted, and Valentine returned to singles competition as a contender for both the Intercontinental and WWF Championships. As the 1980s came to an end, Valentine returned to the tag ranks with another former famous Intercontinental Champion, Honky Tonk Man. The two, managed by “Mouth of the South” Jimmy Hart, went by the name Rhythm and Blues. While they were contenders for the WWF Tag Team Championship, Valentine did not see the success he had known with past partners, and the team was disbanded.

Continuing into the 1990s, Valentine remained a thorn in the side of WWF Superstars participating at the Survivor Series and Royal Rumble. Conscious of his diminishing status, Valentine left the World Wrestling Federation and joined World Championship Wrestling in 1992. He formed a tag team with Terry Taylor for six months and the duo would go on to win the WCW United States Tag Team Championship. Following Taylor’s departure from WCW, Valentine was left to fend for himself. He quit the company late in the year when he was asked to lose to Sting.

On March 13, 2004, at WrestleMania XX, the Hammer’s three-decade career was honored as he was inducted into the WWE Hall of Fame. An emotional Valentine dedicated the tribute to his late, great father, Johnny Valentine. He continues to appear on the independent wrestling circuit, but Greg “The Hammer” Valentine will always be remembered as one of wrestling’s toughest, the man who helped make the Figure-Four Leglock one of the most feared holds in professional wrestling history.

Just how old is Greg “The Hammer” Valentine? The WWE Hall of Famer, whose real name is Jonathan Anthony Wisniski, is at an age where he’s almost a senior citizen. He is 63-years-old (born on September 20, 1951, in Seattle, Washington) . . . Greg Valentine had two daughters, Vanessa and Romaine, from his first wife. In June 2014, it was reported by a wrestling news website that one of them had passed away that month, thus forcing him to miss a wrestling convention. He has not confirmed the rumor . . . The subject of Greg Valentine’s net worth is a top online search on the legendary wrestler. The figure, however, has never been confirmed.