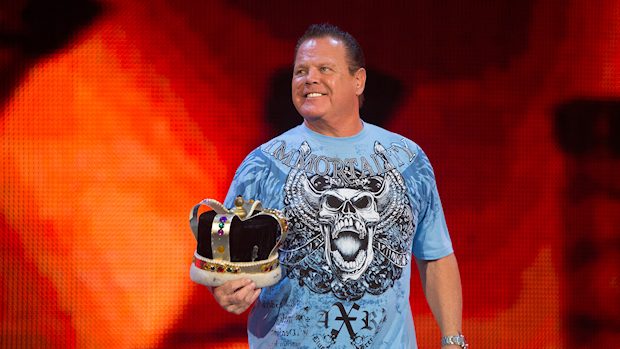 Jerry Lawler had an interesting interaction with Vince McMahon last week at the Royal Rumble.

Lawler explained that the call concerned his crown, which he placed in between himself and fellow WWE Hall of Famer, Booker T. McMahon contacted Lawler via cellphone and advised him to move the crown over to his left side, away from Booker T. Lawler’s impression is that McMahon had the ideal camera shot in mind when he made the call.

“I think we had already done the opening of the [Kickoff Show] and all of a sudden – this was just crazy,” Lawler said.

“I don’t even know how I had my phone sitting behind my crown where nobody could see my phone, but if I needed it, I could use it or look down, or text, or whatever. And all of a sudden, my phone lights up. I had it on silent but my phone lights up, and we’re in a little commercial thing where they’re showing some B-roll or whatever, so I look at my phone and I was taken aback. I’m thinking, does that really say what I think it says? And it says, “Vince McMahon.”

“I’m like, this can’t be right. I’m on the pre-show, Vince McMahon calling me, right? I mean, this is gotta be some kind of rib or something. So I press, I go, ‘Hello?’ And all of a sudden Vince goes, ‘King?’ I said, ‘Yeah?’ He said, ‘Take your crown and move it from your right side over to your left side.’ And I’m in shock, and I pick my crown up and I move it over to the left side, and I say, ‘Like that?’ He said, ‘Perfect, thank you.’

“I’m thinking, this is awesome. Not only is Vince watching the pre-show right now, actually looking at the pre-show in such depth and detail that he thinks he’s looking there and he’s thinking, you know, I think this would be a better shot of King’s crown it not in between him and Booker. If it was just over on his right side, I think that would be better.”