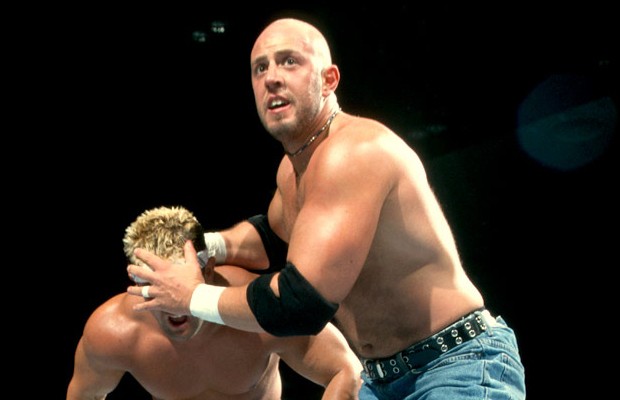 Former WWE Superstar Justin Credible caused quite a scene Friday night in Connecticut, as he attempted to hijack a wrestling show while under the influence.

It all went down during Blitzkrieg Pro’s event in Enfield after Credible rolled into the ring and began to stumble around demanding a microphone.

Wrestlers can then be heard asking each other if the situation is a shoot.

The next few minutes are filled with the roster/staff asking Justin to leave the ring, which he refuses, and it eventually leads to the promoter getting involved. The promoter says, “You were my hero growing up! I swear to God. And you are a freaking disgrace right now.”

He continued, “I’m the guy that’s paying you tonight and asked you not to come here because you reek like booze and you tell everybody that you’re sober. You’re not. And all these people paid to see you and you’re in there glossed over, stumbling everywhere. GET OUT!”

After leaving the ring, Justin comes out again minutes later in an attempt to once again get the microphone. He is denied and finally walks away from the ring.

Here is a video of the incident.

Back in July, Credible announced he was going to WWE sponsored rehab after posting an alarming video on YouTube. Credible took to Twitter just last month and announced that he was clean and sober, thanking WWE and their Wellness Policy. The 44-year-old, who retired from the ring in 2015, also teased a return to the ring in 2018.

When I retired from pro wrestling I honestly didn’t think I would miss it all that much. The last year of my life has been full of ups and downs. Most of them public. My struggles with addiction have been well documented. I’m pleased to say that TODAY i’m clean and sober ….cont pic.twitter.com/3QTrnZSTm1

Through the amazing help of the @WWE wellness program I am able to live a life I never thought possible with gratitude love and compassion. I also want to say that when I retired October 16 2015 I was not the person that you remember as Justin Credible. pic.twitter.com/kbvlKPYips

What I’m basically trying to say is 2018 is going to be the year that I redeem myself. Not only in the eyes of the fans but of my peers. I gave this business everything and in return I got lost along the way as so many do. This is in some gimmick to try to get bookings. pic.twitter.com/PWKR3pynso

If for no other reason I just want to show everyone that with the love and support from the fans & @wwe Wellness program anyone can battle their demons and come back better than ever. Stay tuned…… pic.twitter.com/IliI5PiRxB

Beginning his wrestling career in 1992, Credible worked for the WWE between 1994 and 1997, then headed off to ECW until 2001. He returned to WWE from 2001 until 2003 and made another brief run with the company in 2006. He continued to wrestle at independent shows until 2015, but has made sporadic non-wrestling appearances since then.