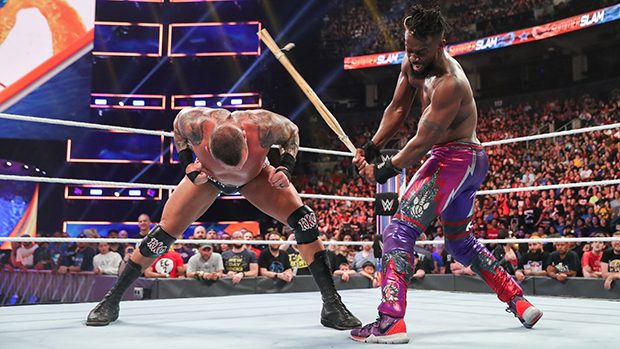 The SmackDown LIVE Superstars were battling outside of the ring when Kingston took exception to Orton taunting his wife and children.

HE’S READY FOR YOU, RANDY! 💪💪@TrueKofi retains his #WWETitle against @RandyOrton due to a double count-out. #SummerSlam pic.twitter.com/pZTASJ75jB

Energized by Orton’s disrespect, Kingston snapped, raining blows on the challenger with both his fists and a Kendo stick. He was so fired up he didn’t even seem to notice (or care) that the referee called a double count-out just before the mayhem started. Kingston waited for Orton to stagger to his feet before knocking him to his back with Trouble in Paradise.

This, however, was not the originally planned finish for the match.

With WWE 24 – Kofi Kingston: The Year of Return streaming on the WWE Network immediately following SummerSlam, the WWE creative team originally planned on having SummerSlam end with Kingston vs. Orton. That didn’t happen since creative instead opted to end SummerSlam with Brock Lesnar defending the Universal Championship against Seth Rollins.

The original finish for the match was for Orton to hit Kingston with the RKO and then roll out of the ring to mock Kofi’s family by shouting, “He’s stupid … stupid … stupid …” Orton would then enter the ring and Kingston would hit him with Trouble in Paradise to pick up the win.

The angle coming out of this would’ve been that Orton got distracted (due to his actions), resulting in a rematch. While not announced, a rematch is scheduled to take place at WWE Clash of Champions on Sunday, September 15. Their feud is expected to last through October.