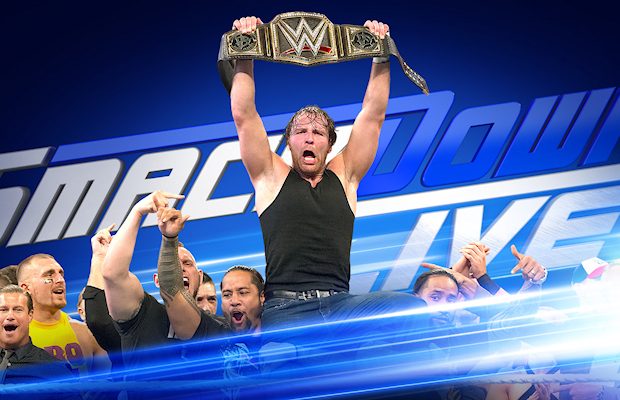 – Tonight’s WWE SmackDown opens up with General Manager Daniel Bryan and Commissioner Shane McMahon backstage. They talk about how the show is all about the fans now and make their way out to Daniel Bryan’s theme. We go to a new intro video and theme song.

Shane and Bryan enter the ring. The SmackDown roster is gathered all around the apron. Mauro Ranallo, JBL and David Otunga are on commentary. Fans chant for Shane and he thanks them. Shane talks about opportunity and announces that SmackDown will begin holding their own pay-per-views with Backlash on September 11th. Shane introduces the undisputed WWE Champion Dean Ambrose. Ambrose comes out to a pop and wonders who will step up to face him. Bryan announces a Six Pack Challenge for tonight. The winner faces Ambrose at SummerSlam. Bryan announces John Cena as the first entrant. Cena steps through the ropes and stands beside Ambrose. Bray Wyatt is in next, followed by Dolph Ziggler. Baron Corbin and AJ Styles are the last two. Bryan announces that the 6th spot will be filled by the winner of a battle royal, which is next. We go to commercial.

Back from the break and the battle royal kicks off. Kane fights off Zack Ryder, Konnor and Simon Gotch. Gotch gets eliminated first. Kane eliminates both members of The Ascension. Kane stomps on Kalisto. Erick Rowan works on Aiden English. Uso and Alberto Del Rio go at it. Del Rio with an enziguri on Kane. Fandango is eliminated next. Jey Uso is eliminated next as we go to commercial.

Back from the break. English and Rowan were eliminated during the break. Del Rio eliminates Mojo and fans boo. Del Rio with a Backstabber on Crews. Del Rio gets eliminated. Kane dumps Breeze and Fandango. It’s down to Kane, Ryder, Crews and Kalisto. Kane drops everyone and takes control.

More action between the four with finishers hit. Ryder works on dumping Crews. Kalisto comes over and helps Crews work on Ryder. Ryder fights them off and hits a neckbreaker on Kalisto. Action on the apron between Kalisto, Ryder and Crews. Ryder slips coming off the top. Kane gets up and tosses Kalisto over the top with one hand. Ryder gets up but Kane drops him. Kane boots Crews and splashes both men in the corners. Ryder takes Kane down and goes for the Broski Boot, nailing it. Crews gets a Boot as well. Kane tosses Ryder over the top with one hand. Kane grabs Crews for a chokeslam but it’s countered. Crews dumps Kane over the top for the win and the spot in the 6 Pack Challenge.

– After the match, Crews hits the corners to celebrate as we go to replays. Crews goes to the floor where Renee Young is waiting. Crews says he’s the happiest man in the world but he’s not going to really celebrate until he wins the main event and goes to SummerSlam. Tonight’s main event will be Cena vs. Wyatt vs. Ziggler vs. Styles vs. Corbin vs. Crews.

– We see Becky Lynch and Natalya walking backstage. Back to commercial.

– Back from the break and Dolph Ziggler cuts a backstage promo on how he got lost along the way, trying to steal the show every night, but he’s getting back on track with tonight’s main event.

We go to the ring and out first comes Becky Lynch. Natalya is out next.

Natalya takes control early on and gets some boos. Natalya keeps control and keeps Becky grounded now. Fans try to rally for Becky. She fights out and rolls Natalya up for 2. Becky goes on and hits a clothesline and more offense. Becky gets fired up but misses in the corner. Natalya runs into an elbow. Natalya sweeps Becky onto her head as we go to commercial.

Back from the break and Becky unloads. Natalya counters. More back and forth. Becky comes off the top for a 2 count. More action between the two. Natalya with another 2 count after a German suplex. Natalya gets frustrated and yells for Becky to get up. Becky blocks the clothesline and rolls Natalya up, going into the Disarm Her. Natalya reverses that. Becky blocks a Sharpshooter. Natalya with the big clothesline for another 2 count. Becky ends up getting the win by submission.

– After the match, Renee interviews Becky in the ring but Alexa Bliss interrupts and starts cutting a promo. Naomi interrupts her and can’t believe Bliss is running her mouth already. Carmella interrupts next and says SmackDown is about to get fabulous. Next, Eva Marie’s music hits and out she comes as a voice narrates, praising her. She poses on the stage as the others look on from the ring.

– Still to come, the Six Pack Challenge. Back to commercial.

– Back from the break and they air a pre-recorded promo from Baron Corbin. He says he’s going to win tonight’s main event for himself.

– Maryse is in the ring with WWE Intercontinental Champion The Miz for another episode of MizTV. She does the introduction for her husband and fans boo.

Miz reveals that the former world champion he’s landed for tonight’s guest is – The Miz. He sits down and pretty much interviews himself. Randy Orton interrupts and comes out to a pop. Fans chant for the RKO.

Miz welcomes Orton and wonders why he’s here. Orton gives Miz props for his mic work and says clearly he’s an expert in playing with himself. Fans chant “Randy” now. Miz gets annoyed and wonders why Orton is out here when he has a match with Brock Lesnar coming up. Orton says he’s going to Suplex City and yea it will be a bumpy road but it only takes one RKO to send Lesnar’s ass to Viperville. Miz says it’s a shame Orton accepted the match with Lesnar because his first match back might be his last. Orton says it won’t be his last and doesn’t have to be his first back. Orton was hoping his first match in 9 months could take place tonight in Buffalo. Orton proposes a match against Miz for tonight. Miz asks fans if they want to see the match but says no. He says Orton doesn’t just get a shot at the Intercontinental Title. Orton understands and says the title won’t be on the line, just a friendly competition between old friends. Miz says he’s not falling for Orton’s tricks. Orton asks if he’s scared to get his ass beat in front of his pretty little wife. Orton wonders who does the pitching and the catching in the relationship. Maryse runs her mouth to Orton and accepts the challenge for Miz. We go to commercial.

The Miz vs. Randy Orton

Miz brings it back in the ring and Orton nails the RKO outta nowhere. Orton doesn’t pin Miz and takes his time getting up as Maryse looks on and Miz is down. Orton stalks Miz and fans cheer. Miz gets up and Orton nails another RKO for the pin.

– After the match, Orton celebrates as we get replays.

– Still to come, the Six Pack Challenge main event. Back to commercial.

– Back from the break and we get a video package for “American Alpha” Chad Gable and Jason Jordan. They want to be the faces of the tag team division and will debut next week.

– A local wrestler is in the ring waiting when Heath Slater appears. He lays the guy out and sends him to the floor. Slater is upset. He says there must be a mistake. He wonders how he wasn’t drafted to RAW or SmackDown. Slater says if Bryan and McMahon want to lead SmackDown into the New Era, put him into the main event and make it a 7 Pack Challenge. Slater gets a “sign Heath Slater” chant going.

Shane comes out and says if Slater is looking for a job, there’s a better way to accomplish that than interrupt live TV. Like send a resume. Slater plugs the WWE Network and that’s his resume. Slater says he was the brains behind all of his stables and if he’s given the chance, he can do so much more. Slater brags about being the hottest free agent. Rhyno suddenly appears from the crowd and comes up from behind. Shane says Slater is right, he’s looking at the hottest free agent. Slater turns around and takes a Gore to a big pop. Rhyno celebrates in the corner as we go to replays. JBL reveals that Rhyno has been signed by SmackDown.

– We get a pre-recorded promo from AJ Styles. AJ isn’t happy about having to qualify for SummerSlam and says he’s the obvious choice. AJ says he will beat up the other Superstars in the match like he always does. Back to commercial.

– We come back and Bray Wyatt cuts a promo on tonight’s main event. Wyatt says five men will fall tonight and soon he really will have the whole world in his hands.

Wyatt attacks Cena to start. Corbin tosses Ziggler to the floor. AJ and Cena go at it now. Corbin and Wyatt go at it. We go to commercial with chaos in the ring.

Back from the break and Crews is being double teamed by AJ and Wyatt in the ring. Wyatt with a senton. Wyatt takes a bow in front of AJ and then the crowd. Everyone else is down on the floor. Wyatt floors AJ with a clothesline out of nowhere. Ziggler dropkicks Wyatt and splashes him in the corner. Ziggler with rights and a neckbreaker. Ziggler with the elbow for a 2 count on Wyatt. Corbin pulls Ziggler to the floor and drops him with a right. AJ with a running knee to Corbin from the apron. AJ springboards in and hits the 450 on Wyatt for a 2 count as Cena breaks the pin.

AJ drops Cena again. Crews with a trios on Styles. Corbin grabs Crews and slams him to the mat for a 2 count. Corbin gets frustrated and stomps on Crews. Corbin with another 2 count and more frustration. Corbin keeps Crews grounded now. Crews fights up and out but Corbin decks him and clotheslines him in the corner. Corbin keeps control of Crews and stands tall as we go to commercial.

Back from the break and we get two towers of doom from the corners. Corbin gets a close 2 count on Crews. More back and forth between Crews and Corbin. Wyatt breaks a pin by pulling the referee to the floor as there are no disqualifications. Wyatt with Sister Abigail on Crews. Ziggler with a Zig Zag on Wyatt. Ziggler covers but the referee is still down. Ziggler readies for Sweet Chin Music but Cena runs in and hits him with an Attitude Adjustment. Wyatt goes for Abigail on Cena but it’s blocked. AJ with a pele kick on Wyatt. Cena with an AA on Styles for a close 2 count.

Crews comes off the top on Cena but Cena rolls through and hits the AA on Crews. Wyatt runs in and also takes an AA. Corbin is next but Cena can’t get him up. Cena ducks a punch and nails the AA on Corbin. AJ leaps in and takes out Cena. Ziggler ends up getting the pin on AJ with a superkick.

– After the match, Ziggler celebrates as we go to replays. WWE Champion Dean Ambrose is out to the ring to a pop. They face off in the middle of the ring and Ambrose raises the title. We get more replays and out comes GM Daniel Bryan. He raises their arms and they pose. Commissioner Shane McMahon is out next to join them. SmackDown goes off the air with Ziggler and Ambrose having words.