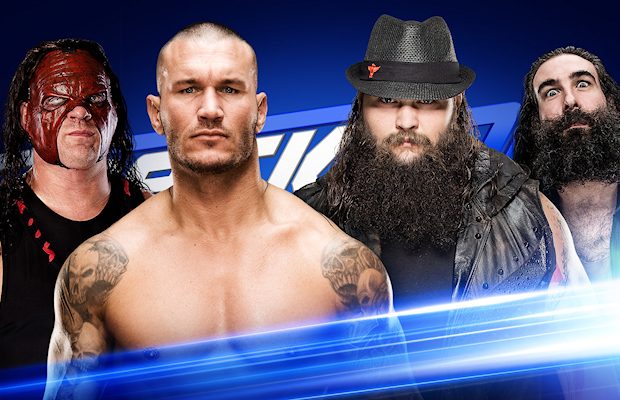 – Tonight’s WWE SmackDown opens with a look back at No Mercy.

– We go right to the ring and out comes new WWE Intercontinental Champion Dolph Ziggler.

Ziggler cuts a promo on how he overcame the odds and won the title at No Mercy. He’s interrupted by The Miz and Maryse. They’re dressed in all black and stop in the middle of the ring for a moment of silence. They’re mourning the death of the Intercontinental Title. Miz rants on how he brought prestige back to the title. He says Ziggler’s win is a funeral for the prestige of the title. Miz says this is not the end of this story, this is just act 2, where the hero needs to overcome odds. Miz says he’s that hero.

Miz goes on and we see video from the end of the match where Miz looked like he was crying. Ziggler mocks him. Miz says this isn’t funny, he takes it very serious… a “you were crying” chant breaks out. Miz goes on and tells Ziggler to imagine what he will do to get the title back. Miz says he’s not done with Ziggler and neither are they… out come Kenny and Mikey of The Spirit Squad.

2-on-1 Handicap Match: The Spirit Squad vs. Dolph Ziggler

Kenny and Mikey hit the ring for a Handicap Match, which was made by Daniel Bryan earlier. Ziggler starts off with Mikey. Ziggler takes control and has words with The Miz as we go to commercial. They keep the feed streaming in the corner of the screen and we see Mikey and Kenny meeting with The Miz. They go back in and Kenny goes at it with Ziggler.

Back from the break and Kenny is in control of Ziggler. Mikey comes in and keeps control but gets caught in a sleeper hold. Ziggler ends up taking out Kenny and rolling Mikey up but Ziggler doesn’t see the tag and in comes Kenny to break the pin. Ziggler counters a double team with a double DDT. Ziggler unloads on Kenny but Mikey gets a cheap shot in from the apron. Kenny drops Ziggler for a close 2 count. Ziggler counters a move and hits Kenny with a superkick for the win.

– The announcers talk about SmackDown Women’s Champion Becky Lynch being out of action with a medical condition unrelated to competition. Becky will defend against Alexa Bliss at the November 8th SmackDown from Glasgow, Scotland.

– Still to come, Kane and Randy Orton vs. Luke Harper and Bray Wyatt. Also, Shane McMahon and Daniel Bryan have a Survivor Series announcement. Back to commercial.

We go to the ring and out first comes Carmella. We see video from earlier today where she destroyed Nikki Bella backstage. Naomi is out next. Carmella attacks her before the bell and they regroup as we go to commercial.

Back from the break and Carmella is in control. We see Alexa Bliss watching backstage. Naomi ends up getting the win after Nikki Bella comes down the ramp and distracts Carmella.

– After the match, Nikki chases Carmella away and stands tall with Naomi.

– Alexa Bliss is backstage with Andrea D’Marco. She says she can beat Naomi any day of the week. Daniel Bryan walks up and makes the match for next week.

– Still to come, a victory speech from AJ Styles.

Back from the break and The Usos are out with American Alpha. Back and forth to start with Gable getting the upperhand. Uso works on Gable’s arm.

The end sees Jimmy roll Gable up out of the corner. Jey Uso pushes on his brother from outside of the ring to keep Gable pinned down.

– We go backstage to Zack Ryder and Mojo Rawley. Mojo rides Ryder for not partying last night, saying he was probably at home playing with his toys. Ryder wants them to stay focused on the titles. The Ascension appears and just stare them down before leaving.

– Still to come, Orton and Kane vs. Harper and Wyatt. Also, AJ Styles’ victory speech. Back to commercial.

– Back from the break and out comes WWE World Champion AJ Styles for is No Mercy victory speech. Styles talks about beating John Cena and Dean Ambrose on Sunday. He knocks the fans and goes back to talking about the No Mercy Triple Threat. Styles says he’s a winner and winners always find a way to win.

Styles says he’s going to give someone a main event opportunity tonight. He calls for his opponent to be sent out and here comes Dean Ambrose to a pop. It doesn’t look like this is who Styles was expecting. Ambrose knows Styles wasn’t talking about him because Styles likes the easy way out. Ambrose says he’s not done with Styles, Styles belongs to him and no one is jumping him in line. Styles says this person isn’t on the roster. He calls for the mystery man to come on down and h ere comes infamous jobber James Ellsworth.

Styles talks about the match and says it will be non-title. Ambrose says he actually wants to see this match, he’s going to sit at ringside and watch. Styles says this is an opportunity of a lifetime and Ambrose can’t sit there to distract Ellsworth. Styles Ambrose to get to stepping and head to the back. The music interrupts and out comes Daniel Bryan. Bryan says AJ may be the champ who runs the camp but he’s the guy who runs SmackDown and he makes the matches. Bryan says he’s also a huge James Ellsworth fan and the match is happening right now. Bryan says AJ was right, Dean won’t be at ringside. Because he will be the special guest referee.

Ambrose takes the shirt from the actual referee and we get ready to go. Bryan says if AJ puts his hands on Ambrose the referee, he will be fined or suspended. Ambrose tucks his shirt in and empties his pockets, handing everything to AJ. AJ throws Dean’s belongings to the floor. Dean calls for the bell. Ambrose checks AJ for foreign objects as we go to commercial with the video playing in the corner.

Lots of stalling to start the match. Ambrose pulls shenanigans all during the match, leading to Ellsworth getting the non-title win after Ambrose hits AJ with Dirty Deeds and puts Ellsworth on top of him.

– We go backstage to Randy Orton and Kane. Orton cuts a darker-than-usual promo on “his world” and asks Kane if he wants to come along for the ride and Kane says he’s in. Kane says Orton has issues. Orton walks off.

– Back from the break and we see Ellsworth’s big win. AJ is backstage and he’s furious, walking in on Bryan and McMahon. Shane confirms AJ lost the match and asks if he understands. AJ says he understands he will have to take matters into his own hands. AJ walks off. Bryan says he has an idea for Ellsworth for next week.

– Still to come, Orton and Kane team up. Back to commercial.

Luke Harper and Bray Wyatt vs. Kane and Randy Orton

Back from the break and out comes Bray Wyatt with Luke Harper. Harper says this world put him to sleep but now he’s awake and he sees that light. Wyatt says that light burns brighter than ever. He cuts a promo on Randy Orton, telling him to bring his monster Kane out so they can both get beat down.

Back from the break and Orton is out with Kane. Back and forth with action in and out of the ring during the match.

The finish sees the lights go out. They come back on and Kane is missing from the apron. Harper is standing where Kane was. Harper extends his hand for a tag to Orton and laughs. Orton turns around to Wyatt. Wyatt nails Sister Abigail for the win.

– Orton is shocked as Wyatt’s music hits and we get replays. SmackDown goes off the air with Wyatt and Harper posing on the stage. Kane is still missing.