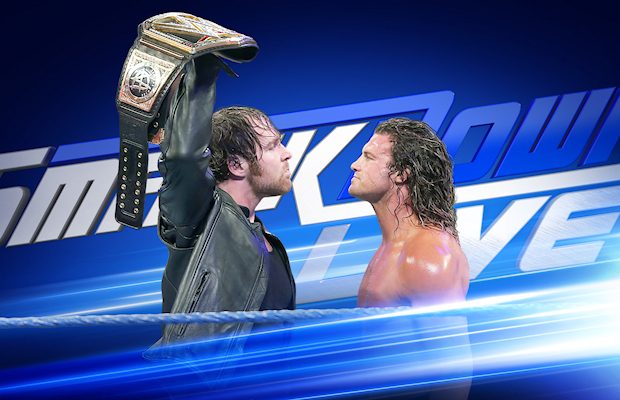 – Tonight’s WWE SmackDown opens with Randy Orton, Shane McMahon and Daniel Bryan backstage. Shane has a TV screen and shows us the RKO outta nowhere to Brock Lesnar on RAW. Shane says it was awesome but there will be repercussions later. Shane and Bryan have a bunch of security and Orton asks if it’s necessary. Orton ends up leaving and Shane sends half of the crew behind him and tells the other half not to let Lesnar into the building if he tries tonight. Shane and Bryan bump into Maryse and WWE Intercontinental Champion The Miz next. Bryan makes Apollo Crews vs. Kalisto vs. Baron Corbin for tonight with the winner facing Miz at SummerSlam. WWE Champion Dean Ambrose walks up next.

Ambrose says he’s headed to the ring to address the #1 contender. We go to the SmackDown intro video and come back to Mauro Ranallo, David Otunga and JBL on commentary. Greg Hamilton introduces the WWE Champion and out he comes to a pop.

Ambrose talks about getting to where he’s at now and says he likes the view at the top. It’s all about staying there. Ambrose likes leading the blue brand and says he’s here to stay. Which brings us to SummerSlam and Dolph Ziggler, the Show Off, Mr. Booty Shaker. This brings Ziggler to the ring. Ziggler takes a mic and says he’s a big fan of Ambrose, the two are actually similar. Ambrose says they’re not, they’re nothing alike. Ambrose says Ziggler is all show and he’s all go. They trade promos. Ambrose says yea, Ziggler will steal the show at SummerSlam and they will have a good match. But Ambrose will do what he does and he’s a winner. Ambrose says Ziggler will steal the show but he’s going to lose. Ziggler fires back and cuts a passionate promo, saying he’s going to burn Brooklyn down and take the title from Ambrose at SummerSlam. Ambrose says no he’s not, and it’s not because of any conspiracy theory or anyone holding Ziggler down. Ambrose says Dolph will find out his real problem – he’s not as good as he thinks he is. Ambrose drops the mic and leaves as Ziggler looks down.

– The Wyatt Family graphic flashes and Bray Wyatt is in the ring. He lays Ziggler out with Sister Abigail. Wyatt says Ziggler doesn’t deserve the power of calling himself a champion. Wyatt asks the fans if they really believe Ziggler is our next WWE Champion. Some don’t. Wyatt says Ziggler stole something from him and he wants it back. Wyatt makes a challenge – face him tonight and if he wins, he proves he’s worthy of being the #1 contender. If Ziggler loses, Wyatt will replace him at SummerSlam as the #1 contender to Ambrose. Wyatt dares Ziggler to prove he really is that damn good. Fans chant “yes!” and Wyatt tells us to follow the buzzards.

– Still to come, AJ Styles has a message for John Cena. Also, American Alpha debuts. Up next, a Triple Threat to determine The Miz’s next challenger. Back to commercial.

– Back from the break and the bosses are checking with security for Lesnar. Ziggler approaches and he’s fired up. Ziggler wants the match with Wyatt and Bryan makes it for tonight.

We go to the ring and out first comes Kalisto. We see Maryse and WWE Intercontinental Champion The Miz at ringside for commentary. The winner of this match will face Miz at SummerSlam. Baron Corbin is out next, followed by Apollo Crews.

Corbin with big shots early on. Kalisto gets a 2 count on Crews after Corbin is dumped to the floor. More action with Kalisto taking Corbin down on the floor and going back to stand tall as we go to commercial.

Back from the break for more back and forth. Corbin points at Miz before stomping away on Kalisto. Corbin with shots to Crews as well. Corbin catches Kalisto in mid-air but Crews dropkicks them both over the top. Crews rolls Kalisto up for the win.

– After the match, Corbin attacks Kalisto until Crews comes back in for the save. The Miz runs in and nails Crews with the Skull Crushing Finale. Corbin takes out Miz and stands tall to end the segment.

– Still to come, Eva Marie vs. Becky Lynch. Back to commercial.

Back from the break and out comes Becky Lynch. Eva Marie is out next as we hear the voice-over praising her.

The bell rings and Eva immediately acts like she has a leg injury. The referee calls for a trainer to come out. The match is called off because Eva can’t compete. Eva limps down the steps and is helped to the back by a trainer and referee.

– We go to Renee Young and Carmella at the SmackLive table. Carmella doesn’t trust Eva’s injury and calls her a Kardashian wannabe. Natalya appears and isn’t happy about Carmella being interviewed instead of her. They have words and it sounds like we have a match for later.

– Still to come, American Alpha debuts. Back to commercial.

The Vaudevillains vs. American Alpha

Back from the break and Aiden English is posing in the ring with partner Simon Gotch. Chad Gable and Jason Jordan are out next to a big pop.

Gable starts off with Gotch and they trade holds. Gable gets the upperhand and in comes Jordan. Gotch nails a knee and tags in English. Jordan blocks a double team and tags in Gable. Gable comes off the top with a double clothesline. American Alpha hits dropkicks and gets riled up for the fans. The Vaudevillains turn it around and work Gable over in their corner.

Jordan finally gets the tag and unloads with suplexes on both opponents. American Alpha gets the win after the double team.

– After the match, Gable and Jordan celebrate as we go to replays.

– Still to come, AJ has a message for Cena. Back to commercial.

– Back from the break and out comes AJ Styles. He’s not in the mood and demands the music to be cut. He’s here for one reason, John Cena. AJ is immediately interrupted by the music as out comes Cena to interrupt.

AJ says before he was rudely interrupted, he had a message for the Cenation. The soccer mom chants start up. AJ says he doesn’t want Cena here. After beating Cena up and defeating him, he’s still here. Styles says Cena doesn’t belong in the same ring with him. Fans give him the “what!?” treatment now. AJ says Cena does his song & dance, and people think he’s some noble hero but they are weak-minded people. AJ says Nashville has the weakest of minds, trust him he knows. An apparent shot at TNA. AJ starts ripping kids in the crowd, then their parents. Then Cena. Cena eventually fires back and rips into AJ. Cena says he’s in WWE because of love. AJ is here to be just a really great wrestler but there is no other place for Cena. Cena gets really fired up and asks why the hell AJ is here. This leads to AJ challenging Cena to a match at SummerSlam. Cena accepts and says he needs to teach AJ’s ass a lesson.

– Still to come, Wyatt vs. Ziggler. Back to commercial.

Back from the break and security is out to protect the ring from Brock Lesnar. Tyler Breeze and Fandango wait as Randy Orton makes his way out to a pop.

Orton breaks out with a back suplex and makes his comeback. Orton with a powerslam. Breeze runs in and catches a powerslam. Breeze retreats back to the floor. Orton with the second rope draping DDT on Fandango. Fans get wild as we see Brock Lesnar approaching the ring. He hops the rail in front of security. Orton sees it and turns around to nail Fandango with a RKO. Lesnar hits the ring and nails Orton with a F5. The referee calls for the bell.

– After the bell, Lesnar looks down at Orton as Shane McMahon is down with Daniel Bryan and more security. Lesnar leaves the ring as fans chant for Suplex City. We go to commercial.

– Back from the break and we see video of Lesnar being led out of the arena. He tells Shane he was just returning the favor. Paul Heyman appears and leaves with Lesnar in a black SUV.

– Daniel Bryan is backstage on the phone talking about Lesnar. Heath Slater appears and Bryan asks how he got in. Slater says he would look great on the SummerSlam poster. Slater says he’s the hottest free agent and nothing is bigger right now. Bryan announces that Slater will get a match next Tuesday and if he wins, he gets a contract. His opponent will be… Slater gets taken out. Rhyno appears and that will be the opponent. Bryan calls for a medic to his office.

– Renee is at the SmackDown Live panel table with Dean Ambrose. Ambrose feels weird about the whole set thing and stands up. Ambrose rants on his SummerSlam opponent possibly changing before we go back to commercial.

– Back from the break and Charly Caruso tries to get comments from Randy Orton but he’s in no mood to talk.

We go to the ring and out comes Carmella with a mic. She’s attacked by Natalya from behind before making it to the ring. Natalya works her over and applies the Sharpshooter on the floor. She keeps it locked as referees try to get her to break it. Natalya walks off.

– Dolph Ziggler is backstage warming up when Shane and Bryan walk in. They remind him he’s potentially giving up a WWE Title shot. Ziggler has a “screw you” for them before walking off. We go to commercial.

Dolph Ziggler and Bray Wyatt are both out for tonight’s main event. The winner gets a WWE Title shot at SummerSlam. WWE Champion Dean Ambrose is on commentary. Ziggler starts hard and attacks Wyatt. Back and forth until we go to commercial with Wyatt dropping Ziggler on the floor.

Back from the break and Wyatt nails a superplex. Wyatt keeps control and keeps Ziggler grounded. Ziggler finally makes a comeback and unloads. He nails the big elbow drop for a 2 count. Wyatt catches a kick and drops Ziggler with a right hand. Wyatt launches Ziggler across the ring and hits the senton for a 2 count.

Wyatt wastes some time and tries to expose the turnbuckle. Ziggler takes advantage and nails a Zig Zag for a close 2 count. Ziggler now tries to expose the turnbuckle and does. Wyatt goes for Sister Abigail but gets rolled up for 2. Wyatt plants Ziggler for another close 2 count. They trade shots and Wyatt gets the upperhand. Wyatt sends Ziggler into the ring post. Wyatt walks into an elbow. Ziggler sends Wyatt into the exposed steel and hits a superkick for the win.

– After the match, Ziggler gets to his feet as we go to replays. Ziggler hits the turnbuckles and stares Ambrose down. Ambrose stands on top of the announce table as Ziggler yells out at him. Erick Rowan suddenly lays Ziggler out from behind. Ambrose hits the ring for the save but here comes Wyatt. Ambrose fights Wyatt off. Rowan slams Ambrose and kicks him out of the ring. Wyatt with Sister Abigail on Ziggler. SmackDown goes off the air with Rowan and Wyatt posing over Ziggler as fans boo.