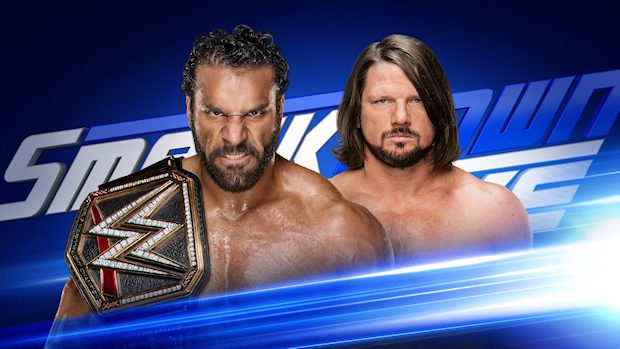 Thanks to Andy Sykes for the following WWE SmackDown spoilers from Manchester, England. These will air tonight on the USA Network and we will still have our detailed coverage at 8pm EST.

* SmackDown Commissioner Shane McMahon opens the show to a big pop. He talks about how SmackDown will be called the A Show after Survivor Series. He also mentions the winner of AJ Styles vs. WWE Champion Jinder Mahal going on to face WWE Universal Champion Brock Lesnar at Survivor Series. Shane says RAW General Manager Kurt Angle and RAW Commissioner Stephanie McMahon will be held responsible for Kane attacking SmackDown GM Daniel Bryan last week but Bryan is not here tonight. Fans boo but Shane says he will be back next week. Shane promises to get payback on Angle. Shane warns the RAW roster that they will be ready for revenge tonight. Shane then introduces The New Day and praises them for their RAW appearance

The New Day all talk about putting RAW under siege again and Shane thanks them. Shane also danced some with them. Kevin Owens and Sami Zayn interrupt, calling them all stupid. Shane says their attitudes are why they aren’t representing Team SmackDown at Survivor Series. The New Day has words with Sami and Owens, leading to Shane making Kofi vs. Sami for right now

* Kofi Kingston defeated Sami Zayn. Good back & forth match with Trouble In Paradise & Blue Thunderbombs. Kofi ends up getting the pin with a move from the top. Owens attacks Kofi after the bell but Big E and Woods make the save

* Backstage segment with WWE Champion Jinder Mahal talking about how AJ Styles is beneath him.

* A new vignette aired for The Bludgeon Brothers, Erick Rowan and Luke Harper

* Randy Orton defeated Rusev. Rusev was to earn a Team SmackDown spot if he could win. Aiden English got them some heel heat before the match by singing. Rusev controlled most of the match until Orton hit the RKO outta nowhere. Very good pops for Orton tonight

* Naomi, Charlotte Flair, Lana and Tamina Snuka are all out to watch Becky Lynch finally get her hands on James Ellsworth. Ellsworth is out with Carmella. Big pop for Becky during her entrance

* Becky Lynch defeated James Ellsworth. Ellsworth does a lot of stalling early on, which just pisses Becky off. She goes for an early Disarm Her attempt. Fans chant “where’s your chin?” at Ellsworth. Becky takes Ellsworth down for some holds and taunts him as she out-wrestles him. Ellsworth shoves Becky out of the ring for some big heat. Becky comes back with offense but Ellsworth tries to leave and the rest of the female Superstars prevent him. Becky eventually makes Ellsworth tap to her finisher

* SmackDown Tag Team Champions The Usos retain by count out over Shelton Benjamin and Chad Gable. They trade offense for a few minutes until Gable dives onto Jimmy Uso at ringside. The referee counts and The Usos get counted out. Gable celebrates in the ring after the announcement but Shelton isn’t thrilled

* Backstage segment with AJ Styles to promote the next match

* AJ Styles defeated Jinder Mahal to become the new WWE Champion. The Singh Brothers mocked Paul Heyman in their intro for Jinder. Great match between the two. The Singh Brothers interfered at one point and AJ was launched onto the announce table. The finish saw AJ hit the springboard 450 to Jinder, then Phenomenal Forearms to The Singh Brothers when they interfered again. Jinder hit The Khallas but AJ kicked out. Jinder then took AJ to the top for a super Khallas but AJ countered and hit the Phenomenal Forearm for the win. The arena went wild and AJ did a fun celebration for a few minutes. This was a really cool moment