Luke Menzies Makes His NXT TV Debut – Who Is He? 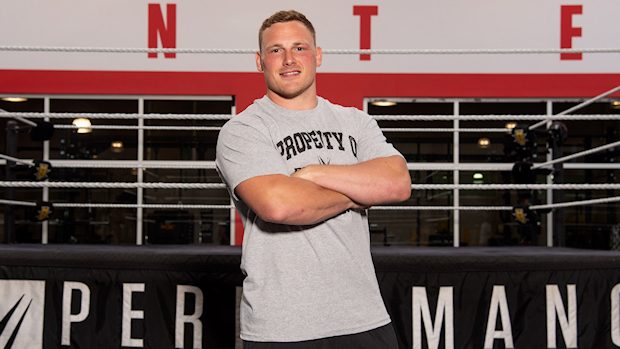 As a former professional rugby player, NXT newcomer Luke Menzies of Leeds, England has experienced his fair share of scrums and scuffles. Yet, none of the bone-rattling blows that Menzies gave and received on the pitch could prepare the muscular rookie for what it’s like to be in the ring with “Limitless” Keith Lee on this week’s episode of NXT.

The 320-pound Lee opened the contest by confounding Menzies with a high-flying hurricanrana. Though Menzies tried to fight his way back into the match with uppercuts and clubbing blows, he was no match for the more experienced Lee. Lee sent Menzies flying with a pounce, crushed him with an avalanche and demolished him with the Spirit Bomb for the pin.

This was Menzies’ first match on NXT television since joining the WWE Performance Center in July as part of a class recruits that includes Lee, Io Shirai and Deonna Purrazzo. Menzies actually made his in-ring debut on July 28 at an NXT live event with a victory over Mars. He then lost to Kona Reeves on August 10 and to Dan Matha on August 25.

Standing 6-foot and weighing 260 pounds, Menzies played professional rugby for a decade, including for the Hull Kingston Rovers and Salford Red Devils, before setting his sights on the ring. Trained by British wrestling legend Marty Jones, the powerhouse grappler has been wrestling since 2016.

Menzies attended a WWE tryout in Glasgow, Scotland in November 2016 and was offered a developmental contract in summer 2017. His move to the United States was held back due to work visa issues, so he continued wrestling on the United Kingdom independent scene in the meantime.