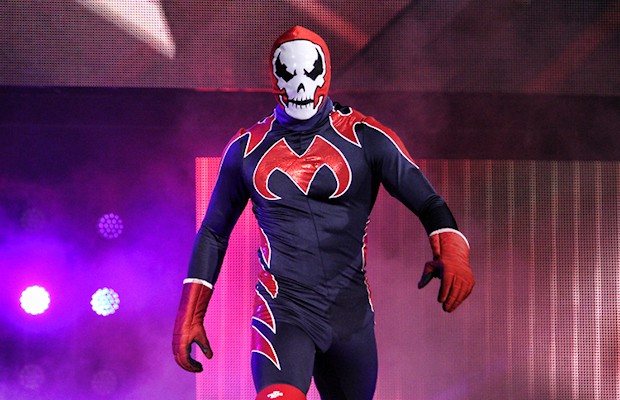 – TNA star Manik (TJ Perkins) appeared on the latest episode of The V2 Wrestling Podcast with Adam Davey. The full interview can be found at this link. The following highlights were sent in:

His new look compared to the Suicide costume:

“All the stuff with the suit was my idea—the alterations, the color schemes, the hood, everything. Part of the goal was obviously you need to evolve as character. In wrestling, it’s like everybody is their own comic book character and each book has its run over however many years. Everybody has to go through an evolution or else your story arc is going to end at some point. So I felt (A) that it needed an evolution and (B) if I create distance from the original look, at some point that’s going to become a classic and iconic type of thing. And that’s sort of what happened. Now when I get requests outside of TNA, some people ask for the old Suicide suit and it’s become retro in a way. That’s one of the things I was going for, because I feel you need some distance to respect how cool that was.”

The reaction towards his character from Suicide to Manik:

“I hope that this isn’t taken the wrong way, but sometimes it takes the person behind the mask to be somebody that is really endearing to the people that are watching it. I feel like as a video game character there’s not a lot of emotional connection to the character, and when they gave it an able-bodied person, the first people that they gave it to were actually people that guys really love but not necessarily as that character. I feel like maybe it had the right rhythm with me and it created a more endearing thing for people to see. I sort of took over the character at an odd time. Maybe at the point where the character was not popular, I got handed a rough poker hand and I had to make it into something that I could use and give people new perspective on it. I’ve worked really hard to make it what they intended it to be from the beginning, and I’m pushing against odds that aren’t exactly in my favor creatively. I think it gives people a fourth wall type of reason to enjoy it.”

Does the mask hinder his push in TNA:

“The question that you’re asking, I’ve been asking since the day I grabbed that mask in my hand. In some ways, yeah, I guess it does. This isn’t the first time I’ve heard that it’s affected me creatively, and people within the company feel that way too. Why of all people is this guy wearing a mask and a bodysuit and not talking? He’s a witty, charismatic, good looking kid. Having a mask and certain things, it angles you so that you don’t have the same type of freedom. But it’s not a sprint, so it also gives me a lot to work with in terms of creating a longer character arc. I think that’s a good thing, because there are a lot of people that become a supernova at one point but then they look back and they’re like, ‘Crap, I’m done.’ I’d rather look back over the course of several years and say that I was able to do it slowly and do as much as I can. The complexity of this character and I guess the restrictions and handcuffs that come with it, slowly but surely I’m able to peel away the layers and do different stuff with it in the end.”

His character being more friendly as opposed to dark and evil:

“That was 100% me. For the longevity of myself personally, I didn’t like what they had written. Obviously I’m supporting other characters and I’m fine with that, but at some point this story runs its course and a new arc has to be created. If I come out of this so far removed from my strengths as a character and a performer, then I’m not in a good place—that’s how careers end. So I didn’t want to be a position where I’m taking on these traits and is not entertaining. I wanted to play it more like myself. I’ve always looked at everything as how would I create TJ Perkins. What would TJ be in this match, what would TJ be in this situation? So when we would shoot these things, I would get some direction and I would change it to what I felt was me. It’s like saying your job in this scene is to break out of prison and we want you to grab this weapon, slaughter a bunch of dudes and walk out. Is that who you are; or are you Jack Sparrow and you have to trick your way out and barely escape with your life? I just felt like the character I wanted to play would be more like that.”

Did he know about his storyline with The Revolution:

“That was bestowed upon me, actually. That was not my idea; I didn’t know that was happening. Real life was only slightly ahead of what was seen on camera. It’s not like there are memos or anything around letting everybody know ‘Hey, this is what’s going on.’ I didn’t have any idea that there was going to be a Revolution or anything like that. I just knew that I was going to get mixed up with these guys and do some stuff, and it just became what it became.”

If the Bound For Glory Series return this year:

“Oh, I’m not sure about that. Selfishly I hope not, because I’m a junior and usually I’m not a candidate for the Bound For Glory Series. But no, I hope that it comes back. I really like the sports aspect of wrestling whenever they’re able to incorporate tournaments, round robins and seasons. I’m not sure if something like that is coming back. It might sort of depend on these projects that they have coming up, because it might affect the way they schedule certain events and things like that.”

His plans for the future:

“We have another week in Orlando and then I think we’re working at the end of June, not sure if we have anything confirmed. We also have a bunch of big projects coming up over the summer, which I don’t have all the details so I wouldn’t be able to tell you anyway. But that which I know, I’m not allowed to because it’s different stuff than we’ve ever done. That should be exciting from what I understand. It’s within the realm of Impact, live events and things like that. The stuff that they have on the table, there’s some exciting stuff in the works as far as destinations. But yeah, it’s definitely wrestling-related stuff. I actually have been hoping for some collaborations in some non-wrestling forms. My dream was to be a reenactment actor on some of these ghost shows, but I have yet to get somebody to pull the trigger on it and I think I would be fantastic.”

The death of Perro Aguayo Jr:

“It bothered me for the first few days and I probably replayed about a minute of time, over and over and over all day and all night for days. I haven’t thought about it much since then. There’s been a definite period of feeling I am still in that ring for a couple of days and then I just got to a point, mostly with the help of all those around me. I usually deal with hardship through my work but in this case that’s what it was. I am usually pretty active on social media as those who follow me know but there was a period where I was just gone for a while and Rey was too. I was stuck in a place for a time and then got to a point when it was a good time to move on with the community. The impact of Perito and everything that happened was being absorbed the right way and people were starting to heal. And rather than letting it linger and doing more damage, I felt that everyone involved began to come together.”