Michelle Webb (Nia Jax's Raw Opponent) - Who Is She? | PWPIX.net

Who Was Nia Jax’s Opponent On Raw? 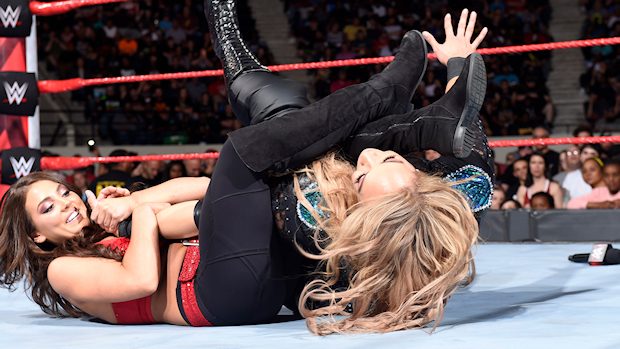 Can Ronda Rousey lock in the armbar on Nia Jax at Money in the Bank?

The answer may well determine whether or not “The Baddest Woman on the Planet” can become Raw Women’s Champion — and “The Irresistible Force” is feeling good about her chances of escaping Rousey’s dreaded signature maneuver.

During her bout against a local competitor named Michelle Webb, the Raw Women’s Champion allowed herself to be placed into the hold, at which point she demonstrated her planned counter by hoisting Webb into the air and powerbombing her into the mat. She then dropped Webb with a Samoan Drop before demonstrating her further prowess by administering a leg drop and a rolling senton. Having apparently made her point, Nia invited Rousey into the ring to help Webb to her feet.

As for the identity of Michelle Webb, she is an independent wrestler by the name of Madi Maxx. Maxx has been wrestling since 2015 and is a former OVW Women’s Champion — she was trained at the Ohio Valley Wrestling school.

During her short career, Maxx has wrestled a few current and former Impact Wrestling stars including Rosemary, Kiera Hogan, Rebel, HAVOK and Mickie Knuckles. She calls herself “The Paris Hilton of Pro Wrestling.”

red is the color of confidence🤩

another day another trip to the beach

you wanna ride first class but i own the plane💰✈️

🌟WOMAN OF THE YEAR🌟 #Repost @3countthursday (@get_repost) ・・・ Voting has ended and we are thrilled to announce our 2017 #podcast3CT Woman of the Year is @maxxmadi Thank you to all the wonderful women who let us feature them, and thanks to all who voted! We look forward to seeing who the 2018 Woman of the Year will be. #womenswrestling #indywrestling #wrestlingislife #ovw #madimaxx #tooglamtogiveadamn #hatersloveme #womanoftheweek #womanoftheyear