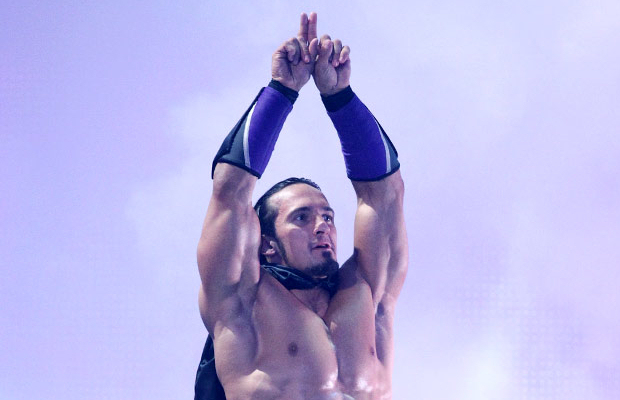 – Neville spoke with Donald Wood, Mike Chiari and Brandon Galvin of Ring Rust Radio before WWE’s Money In the Bank pay-per-view. The full interview can be heard above but below are highlights:

Donald Wood: The jump from NXT to the main roster can be a daunting concept for many stars, but your transition has been seamless. With smaller wrestlers not always finding success in the WWE, were there any concerns from you about making the move and how do you feel the fans and the people backstage are reacting to you?

Neville: I think NXT prepared me for Raw and Smackdown more than I ever could have hoped for. I was with NXT for about two years, so by the time I debuted on Raw I felt very much ready. There was a level of concern but I was lucky in the sense that I got the chance to wrestle some of the top guys early on. Guys like Seth Rollins, Sheamus, and more recently John Cena. So it was a concern that I wouldn’t get those types of opportunities when I came in but I was fortunate enough to get them and grab them. I was very happy in the way I transferred and the opportunities I got.

Mike Chiari: Not long after your main roster debut you put on a great match against John Cena for the United States Championship and it almost looked like you were going to win title before Rusev interfered. What did going shot for shot with one of the biggest stars in WWE history mean to you personally, and what do you think it did for your credibility in the eyes of the fans, especially the ones who weren’t familiar with your work in NXT?

Neville: That match was huge for me. It was very surreal to be standing across the ring from John Cena on Monday Night Raw. I think it really did a lot for me. It was a real opportunity I needed and John is a WWE Superstar. He has been the top guy in the WWE for years and years. So the fact that I had that opportunity and went toe to toe with him was amazing. It put me in front of the eyes of the WWE Universe and the world. That was a really cool experience, it was so much fun and it was priceless.

Brandon Galvin: Shortly after your debut on the main roster, you surprised a young WWE fan on the Meredith show, which created a ton of buzz. How rewarding was that experience for you and what do you consider to be the most rewarding part of being a WWE Superstar?

Neville: That’s the most rewarding thing for me to reach out to the kids. It’s really crazy but it’s the most important thing we do. I really didn’t expect that reaction like everyone gave me being on the Meredith Vieira show. I was sitting in the pit in back, and it made me realize how important what we do really is. That’s the most important thing is how we reach the WWE Universe and how we inspire people in their life. If I can do that and be given the chance to do it, it’s really the best thing we do.

Donald Wood: With the success of stars like Kevin Owens, Seth Rollins, Dean Ambrose, yourself and many others, there is no denying the influence of independent wrestling. How did working the indie scene before coming to NXT help you prepare for the WWE experience and what are some of the difference you didn’t expect?

Neville: The landscape is completely changing and I love it. The way things are working out and the opportunities people I grew up with are getting. I feel the independent scene is important and it fueled my passion for four years. It taught me the life lessons that helped make me who I am today and helped me on the path I followed to living my dream job every day. The independent scene is hugely important and the roads you travel in it shape you. My career path is the best I could have hoped for and that’s thanks to independent wrestling and territories across the world.

Mike Chiari: NXT and WWE were initially treated as very different entities, but now it’s mentioned so often on Raw and SmackDown and you even have Kevin Owens defending the NXT Championship on live WWE programming. What do you think it does for the prestige of the NXT title and for the NXT brand as a whole to be featured so prominently in WWE and be presented to an audience that isn’t necessarily the same as NXT’s hardcore fan base?

Neville: You know I think it does a lot for the brand but I feel like the NXT brand became its own thing by itself. You have to watch the NXT shows to realize the depth of talent the NXT brand has compared to Raw and SmackDown. That’s a real testimony to the guys and girls at NXT. It shows how hard they work to put on such a great product that it’s become its own brand. It’s now becoming more heavily featured on Raw and SmackDown, I think that is just awesome.

Brandon Galvin: How did you come up with the Red Arrow and what type of training or practice goes into doing a move like that in order to have it ready every night?

Neville: The Red Arrow took a long time to come together and I wanted to make a move that was unique to myself. It’s a move I built up with building blocks. I wanted to do a corkscrew moonsault backwards, so I had the idea of doing it forwards like the shooting star corkscrew, and I was aware no one else did that in wrestling. If I could perfect this technique it would be unique to me. So it took a long time and me putting these building blocks together and had to come over the fear involved. Eventually, I nailed it and knew it was going to be my own. It’s been my move now for a long time, about six or seven years now I’ve been using the Red Arrow.

Donald Wood: Everyone knows how Triple H has really taken a lot of the top NXT stars under his wing and brought them up to the main roster with a guide. What is your perception on how Vince McMahon looks at the top NXT stars? Does he look at them the same way Triple H does? How do you think Vince looks at you as a top star?

Neville: It’s hard to say with Vince being super busy with the main brands and PPVs. I don’t know how much time he has to see NXT. I know the guys like the Shield and the Wyatts who go through NXT and found success on Raw and SmackDown paved the way for more movement from NXT to the main roster. It’s really hard to say for definite to be honest.