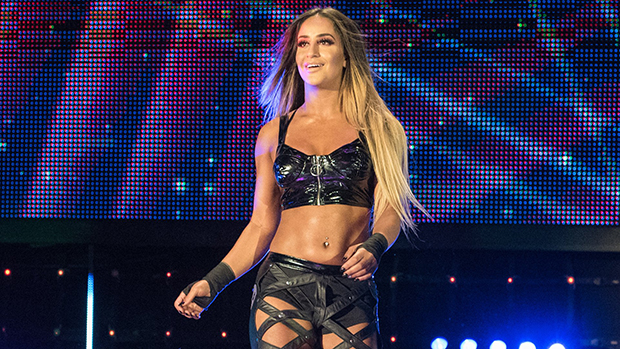 While wrestling Natalya on the April 9, 2020 episode of WWE Main Event, NXT Superstar Aliyah suffered an embarrassing wardrobe malfunction. As you can see in the video below, the 25-year-old had a nip slip.

Nip slips aren’t uncommon among WWE female talent, but what is uncommon is that it occurred during a taped show — WWE taped this match three days earlier at the WWE Performance Center. Wardrobe malfunctions that occurred on live television are often edited out on the WWE Network uploads.

This certainly isn’t the first time that Aliyah had a wardrobe malfunction during a live event. In July 2018, Aliyah had a nip slip at a non-televised NXT live event in Largo, Florida during a tag team match (Aliyah partnered with Rhea Ripley in a loss to Marina Shafir and Nikki Cross). Aliyah’s nip slip was captured on camera by a fan at ringside and you can see the photo here.

The Hottest Photos Of Aliyah
Aliyah proves why she’s among WWE’s finest women in these 10 hot photos.