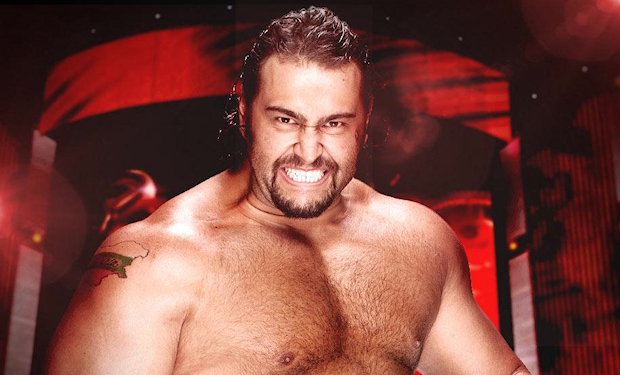 Upon his arrival to WWE, Rusev immediately became one of the strongest competitors on the roster. Billed as a highly touted 2012 Olympic prospect for Bulgaria’s powerlifting team; this super athlete eschewed the weight room for wrestling ring.

In spite of his extraordinary strength, Rusev is not just a musclebound brute. For a man of his great stature, 300-plus-pounds, Rusev possesses uncanny agility and skill. Having trained in Muay Thai and Sumo, his offensive attack also includes an assortment of forceful kicks and knee strikes. It pretty much goes without saying that Rusev is a force to be reckoned with.

Making his WWE debut the No. 6 entrant in the 2014 Royal Rumble Match, the powerful Bulgarian mauled a number of WWE Superstars. It took the efforts of four WWE Superstar to finally dispense the powerhouse from the annual contest.

After spending weeks—with Social Ambassador Lana at his side—of warning members of the WWE Universe of his looming dominance, The Super-Athlete made his first appearance on Raw the night after WrestleMania 30. Rusev annihilated Zack Ryder in a dominating display of strength and speed, forcing the resident WWE punching bag to tap out to his Accolade submission maneuver.

A few weeks later at Extreme Rules, prior to Rusev destroying R-Truth and Xavier Woods in a 2-on-1 Handicap Match, Lana revealed that the commanding Bulgaria-born WWE Superstar had migrated to Russia to live under the rule of her idol, Russian President Vladimir Putin.

At SummerSlam, The Hero of the Russian Federation squared off against Jack Swagger in a Flag Match, where the official was forced to call for the bell when the former World Heavyweight Champion passed out rather than tap-out to the Accolade. Rusev then attacked Zeb Colter and, alongside Lana, stood tall while the Russian National Anthem played.

The following night on Raw, Mark Henry confronted Rusev, who welcomed the WWE newcomer into the Hall of Pain with a crushing World’s Strongest Slam.

On the Sept. 1 episode of Raw, Rusev returned the favor when he delivered a devastating kick to the jaw of the 18-year veteran. Later that night, Rusev retreated as The World’s Strongest Man offered the Bulgarian-born WWE Superstar an opportunity to again enter wing of the Hall of Pain.

Several WWE Superstars have come forward to try to silence The Super Athlete and Lana’s anti-American propaganda, but as these supporters of Russia say, “resistance is futile.”

Latest Rusev News, Photos and Videos ▸
Rusev on PWPIX.net, your go-to source for the latest news, photos and videos . . .

A Look At Rusev

Rusev, who was born Miroslav Barnyashev on December 25, 1985, grew up in Plovdiv, Bulgaria. While growing up in his native land, this future WWE Superstar attended a sports school and competed in powerlifting and rowing as an adult.

When he was twenty-years-old, Barnyashev emigrated from Bulgaria to the United States to pursue his dream of becoming a professional wrestler.

“I moved to Virginia and started working odd cleaning jobs,” Barnyashev told WWE.com in an interview published on August 29, 2013. “For a while I was living out of my car.”

With his life seemingly at a standstill, Barnyashev made the decision to head to California to finally make his dream a reality. His path to the Golden State brought him in contact with former WWE Superstars Gangrel and Rikishi, who together run a wrestling school in Torrance called Knokx Pro Wrestling Academy. Under their tutelage, Barnyashev began training as a professional wrestler. Competing under the name Miroslav Makaraov, the future WWE Superstar made his grappling debut on November 22, 2008 at an independent wrestling event. Barnyashev was victorious in his first outing as he defeated a wrestler by the name of Aerial Star.

In 2010, Barnyashev shortened his in-ring name to Miroslav while competing for Vendetta Pro Wrestling. During his time there, he was managed by Markus Mac. Barnyashev and many other grapplers affiliated with the independent wrestling league appeared in the music video for the Kushinator song, “The Whole F’n Show by Kushinator—the entrance theme Rob Van Dam used in TNA Wrestling and various independent wrestling promotions.

Barnyashev’s gamble would pay off in September 2010 as World Wrestling Entertainment (WWE) signed him to a developmental contract. He was assigned to the sports-entertainment organization’s then-developmental promotion, Florida Championship Wrestling (FCW), where he adopted the ring name Alexander Rusev. His first televised match aired on the July 17, 2011 episode of Florida Championship Wrestling, where he was managed by Raquel Diaz and defeated Mike Dalton. In the wake of his first televised appearance for the developmental league, Rusev suffered a severe knee injury—a torn anterior cruciate ligament and torn meniscus. He spent six months rehabilitating.

Rusev resurfaced in Florida Championship Wrestling in March 2012, with fellow developmental performer Nick Rogers portraying his manager. Lady luck was nowhere to be found, as the injury bug struck Rusev again with a vengeance.

“I broke my neck,” Rusev explained to the official WWE website. “I’m not exactly sure when it happened, but eventually my right arm just stopped moving. I thought it was my shoulder but the MRI showed otherwise.”

Forced onto the sidelines again with a severe injury, the Bulgarian brute took advantage of the recovery time by traveling to Thailand, where he studied the combat sport Muay Thai.

“I’ve always had an interest in Muay Thai fighting,” Rusev told WWE.com. “I love the discipline and toughness of it so I traveled to Thailand to study ways to incorporate it into my style.”

After recovering his neck injury in the spring of 2013, Rusev reemerged with a Muay Thaiesque fighter inspired look, as well as a rejuvenated mindset and brand new style. While he was out of action, Florida Championship Wrestling was re-branded as WWE NXT; he would make his television debut on the May 30, 2013 episode, competing in a battle royale to determine the number one contender to the NXT Championship that had been won by Bo Dallas. His first singles contest on WWE NXT aired on August 21, 2013 in a loss to Dolph Ziggler.

Rusev’s first NXT singles match came about on August 21, losing to Dolph Ziggler. A short while later, Rusev tapped Sylvester Lefort as his manager and formed a short-lived tag team with Scott Dawson called the “Fighting Legionnaires”; the duo feuded with the team of Enzo Amore and Colin Cassady. On the October 30, 2013 edition of WWE NXT, Rusev ceased his affiliation with Lefort by attacking the French grappler during a tag team contest.

After joining the main roster in January 2014, continued to appear on WWE NXT on a sporadic basis. He made his final television appearance on July 24, 2014, getting disqualified against NXT Champion Adrian Neville in a non-title bout.