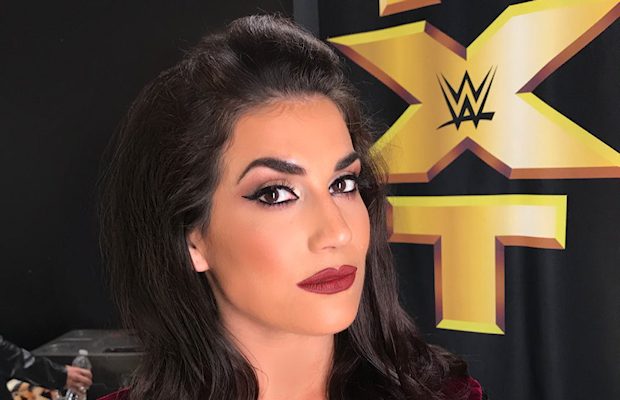 NXT’s Sage Beckett has been released from her developmental contract with WWE.

Pro Wrestling Sheet broke the news of her release this afternoon, saying Beckett was notified of her release earlier in the day. F4WOnline and PWInsider have also confirmed that Beckett is gone from WWE.

While Beckett — real name MaryKate Duignan Glidewell — hasn’t directly addressed her release, she tweeted the following a few hours before the news broke:

On January 4, 2017, WWE announced the signing of Glidewell along with Dori Prange (aka Ruby Riott), Kimberly Frankele (Abbey Laith), and Julia Ho (aka Zeda). Beginning in March, Gildwell appeared at NXT live events as a villainess under the name MaryKate, both wrestling and briefly as Lana’s manager. In July, she began competing as Sage Beckett and was announced as one of the 32 participants competing in the Mae Young Classic. She was eliminated from the tournament in the first round by Bianca Belair.

While Beckett worked over 30 matches at house shows, she only appeared on NXT television once during her run. On the October 25, 2017, episode of NXT, Beckett participated in a battle royal to gain a spot at the fatal four-way match for the vacant NXT Women’s Championship at NXT TakeOver: WarGames but was unsuccessful.

A product of Bubba Ray and D-Von Dudley’s wrestling academy, Glidewell wrestled all over the world after starting her career 2007, with matches in Japan and TNA.

Her run, however, was brief as she only wrestled two more matches for TNA before parting ways with the company in August 2010. It was reported at the time that TNA stopped using her because they felt her in-ring ability wasn’t up to par with the other female wrestlers.

Glidewell would become a mainstay in the female wrestling promotion SHINE before WWE offered her a contract at the end of 2016.