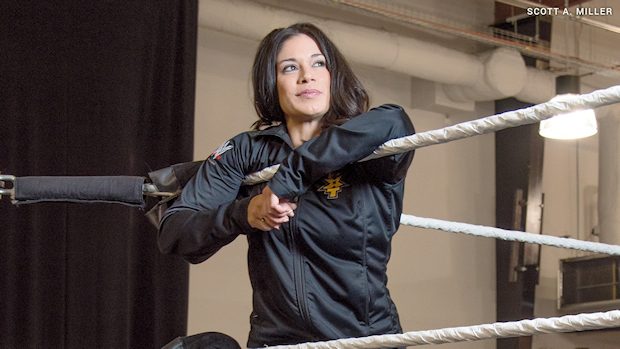 Stock was booked on October 4 at 4:25 a.m. and has already been released by the Vandenburgh Sheriff’s Department.

Stock began her wrestling career in Canada in 2002 and moved back and forth across the country, working for various promotions, facing both male and female wrestlers. She then moved to Mexico in 2003, where she worked under the ring name Dark Angel for Lucha Libre AAA World Wide (AAA) and later for Consejo Mundial de Lucha Libre (CMLL). She is also known for her time in TNA (2009-2013), where under the ring name Sarita, she became a two-time TNA Knockouts Tag Team Champion, holding the title once with both Taylor Wilde and Rosita. She has also worked in Japan for JDStar and World Wonder Ring Stardom, where she held the Wonder of Stardom Championship.

Stock joined WWE in 2015 as a coach at the WWE Performance Center before being shifted to the main roster as a producer.  She was released last month after spending several months on furlough due to the company’s COVID-19 pandemic cutbacks.

The Hottest Photos Of Sarah Stock
Sarah Stock proves why she’s among the finest women in wrestling in these 10 hot photos.