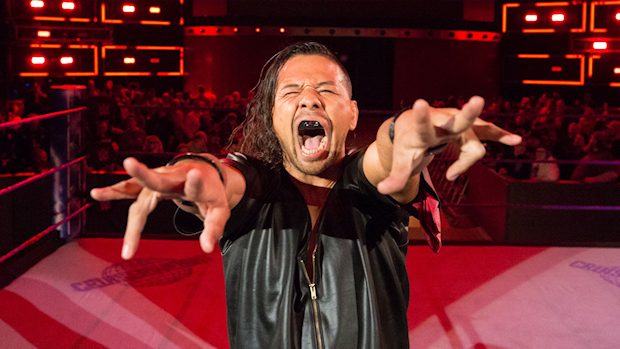 WWE was forced to pull Shinsuke Nakamura from SmackDown LIVE on Tuesday night after the Japanese star was allegedly bitten by a police dog in Bakersfield, California.

According to the Wrestling Observer’s Dave Meltzer, Nakamura sustained the injury on Monday night at a WWE house show at the Rabobank Arena and was subsequently pulled from his scheduled United States Championship Match against Jeff Hardy.

From @davemeltzerWON: Shinsuke Nakamura was bit in the leg by a police dog at the arena in Bakersfield yesterday. https://t.co/94msXrM9Sf

The Bakersfield Police Department issued a statement on the incident on Wednesday, saying that a ‘WWE employee’ got bit by a police dog during a bomb sweep that took place on Monday at the Rabobank Arena before a WWE live event.

The statement, which was issued to the Wrestling Observer and Pro Wrestling Sheet, reads:

“On Monday, June 25, 2018, officers of the Bakersfield Police Department Explosive Ordinance Disposal (EOD) Team were conducting a protective sweep of the Rabobank Arena in preparation for the WWE Live Summerslam Heatwave Tour.

“During the sweep, the EOD Team, which consisted of an explosive detection trained canine team and bomb technicians entered an area of the arena where an employee of the World Wrestling Entertainment (WWE) was present. The canine entered the room to sweep for the presence of any explosive material. As the sweep took place the WWE employee was accidentally bit by the canine. The employee sustained an injury to his lower left leg. Medical aid was immediately summoned to the scene and the employee was transported to a local area hospital for medical treatment.”

Ryan Satin of Pro Wrestling Sheet confirmed with sources in WWE that the “WWE employee” is Nakamura.

Mike Johnson of PWInsider reported additional details on the incident, saying that the police dog sniffed Nakamura and then, without provocation, bite him in the leg.

According to Meltzer in the Wrestling Observer Newsletter published on Thursday, Nakamura got bit while working out at the gym inside the arena.

While the injury was said to not be serious, as a medical precaution, WWE pulled Nakamura from the show’s main event, a Fatal 4-Way Match. In a match won by Hardy, the Intercontinental Champion beat Samoa Joe, Rusev and Shelton Benjamin.

WWE via Dasha Fuentes announced the change on social media Tuesday afternoon but she was deliberately vague with regard to how Nakamura got hurt.

The match ended in a disqualification, which then led Paige to declare a Six-Man Tag Team Match pitting Hardy and The Usos against all three members of SAnitY.

WWE has three live events in Asia scheduled this weekend; Friday and Saturday in Tokyo, Japan, and Sunday in Taipei, Taiwan. Meltzer reported that it is “uncertain” if the injury will impact Nakamura’s ability to perform at the shows. The only word as of Wednesday night as to whether he will be able to wrestle at the shows is that he is off the active roster until he is medically cleared.

The timing for something like this to happen could not have been worse. Nakamura challenging AJ Styles at Sumo Hall in Tokyo sold out instantly, and WWE has not been able to sell out shows in Japan in a long time.

On this, Meltzer said, “In fact, I can’t ever recall an instant sellout at Sumo Hall ever for WWE and for New Japan only for the final night of G-1 in probably 2015 and 2016, as they didn’t even sell out the final night instantly last year because ticket prices were raised so much from the year before.”