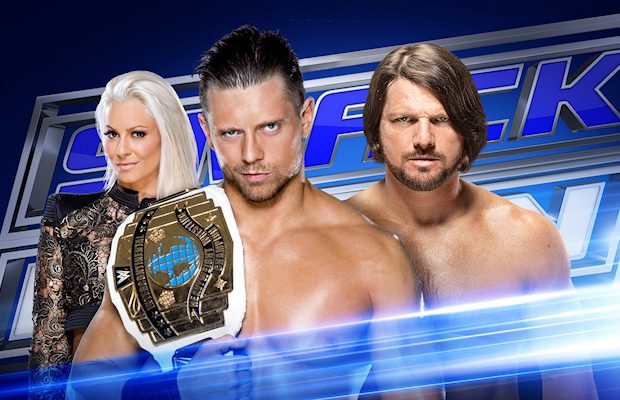 – Thanks to Franny Girard and Ben McCullough for the following WWE SmackDown spoilers from today’s tapings in London:

* WWE Intercontinental Champion The Miz and Maryse kick off SmackDown with MizTV in the ring. We see Luke Gallows and Karl Anderson attacking Roman Reigns on RAW. Guest AJ Styles comes out and says he had nothing to do with it. This leads to Styles vs. Miz being announced for tonight

* Also taking place will be Dean Ambrose and Sami Zayn vs. Chris Jericho and Kevin Owens

* Dolph Ziggler vs. Baron Corbin never happens as Corbin beats Ziggler down outside of the ring and hits End of Days

* AJ Styles defeated The Miz in a good match. Miz tried to leave at one point but Luke Gallows and Karl Anderson stopped him. This led to AJ getting the win. AJ had a staredown with Gallows and Anderson after the match

* The Miz remains in the ring for a dark segment. He wants his loss investigated and he’s not happy about how he’s being treated. Shane McMahon interrupts to a huge pop. Miz demands that Shane put him at the top of his list and starts poking him around. Shane fires back, beats Miz up and sends him flying from the ring

* Backstage segment with Gallows and Anderson. They say they’re just making an impact, not joining up with Styles. They will debut against The Usos on RAW

* Paige and Natalya defeated Tamina Snuka and Naomi with double Sharpshooters. Paige got a huge pop

* R-Truth defeated Fandango with Goldust as special referee. They danced after the match

* Enzo Amore and Colin Cassady come out for promos in the ring. The Vaudevillains interrupt from the stage and they have words about their tournament finals match at Payback. All four were said to be very good here

* A video for Primo and Epico aired

* Shane announces via video that Corbin vs. Ziggler and Styles vs. Alberto Del Rio will take place after the tapings as dark matches

* Chris Jericho and Kevin Owens defeated Sami Zayn and Dean Ambrose in the main event, said to be a very good match