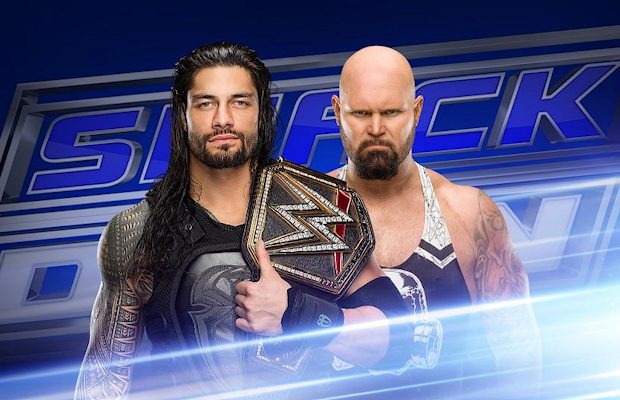 Thanks to “The Show” Jordan Richards and @MikeLawryy09 for the following WWE SmackDown spoilers from tonight’s tapings in Greenville, South Carolina:

* The “Asylum” structure is hanging above the ring

* Kevin Owens defeated Cesaro with a roll-up when Cesaro was distracted by Sami Zayn and WWE Intercontinental Champion The Miz, who had been on commentary. Maryse was with Miz

* Dana Brooke dominated and defeated Paige in a quick match. Becky Lynch was on commentary

* Dolph Ziggler defeated Sheamus. Baron Corbin comes out after and cuts a promo on Ziggler, saying he will kick his ass at Extreme Rules

* Chris Jericho comes to the ring and gets big heat as he knocks the crowd. The Asylum starts to lower around the ring. Jericho goes on with his promo until Dean Ambrose, disguised as a ring crew worker, jumps in the ring and beats Jericho around. Ambrose unloads with a kendo stick and stands tall

* Big Cass and WWE Tag Team Champions The New Day vs. The Vaudevillains and The Dudley Boyz is next. Cass and New Day got big pops, Cass got a few hot tags and finally won with a pin on Bubba Ray Dudley

* WWE World Heavyweight Champion Roman Reigns vs. Luke Gallows ends in a DQ when everyone brawls. The Usos, AJ Styles and Karl Anderson taunted each other all through the match, leading to everything falling apart. Referees break it up and Reigns is left in the ring with Styles. They grab steel chairs but swing at the same time and AJ drops his. AJ nails a pele kick and a chair shot to the back, knocking Reigns out of the ring. Styles stands tall to end SmackDown.