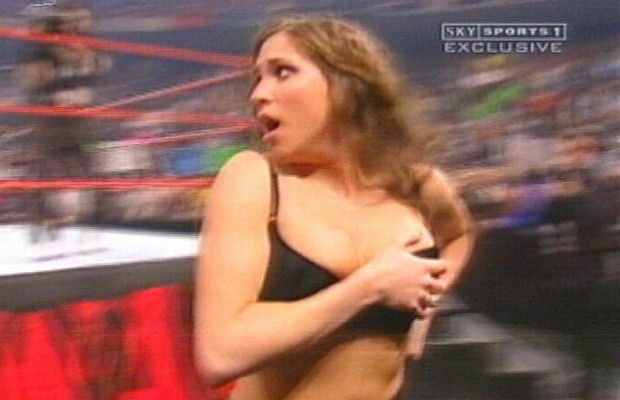 “Stone Cold” Steve Austin headed to the ring to a huge ovation. Carrying a can of beer, “The Texas Rattlesnake” reiterated his demand from last week’s SmackDown! that he wanted a shot at Kurt Angle’s WWF Championship. He told Stephanie McMahon that he had sold all the beers and hot dogs, so he wanted his shot.

Wearing a new blouse, Stephanie then walked to the ring to answer “Stone Cold.” She asked Austin who he thought he was talking to . . . and he answered, “a complete bitch!” She said she hadn’t seen Austin sell one hot dog or beer. She called him a liar, and a beer-swilling Texas redneck — which the crowd in Austin didn’t take to very kindly.

Austin said he had found a few people in the locker room to drink the beer — The Acolytes and Jacqueline! He then made Stephanie wear the tray he held his beer in. He said he didn’t give a rat’s ass what she thought — only about his title shot.

As Stephanie struggled to keep her balance while holding the beer tray, she said she would put him in the mix, since she was a woman of her word. She told Austin that he would face William Regal on Raw, with the winner to move onto SmackDown! to face Undertaker and either The Rock and Kane in a Triple Threat Match, with the winner becoming the No. 1 contender.

She told Austin not to be too surprised when he lost and not to be too surprised when she made him scrub toilets on SmackDown!. She then demanded that Austin get the beer tray away off her . . . and “The Texas Rattlesnake” ripped off not only the beer tray, but also Stephanie’s blouse! As Stephanie ran to the back, struggling to cover herself up, Austin celebrated in the ring!