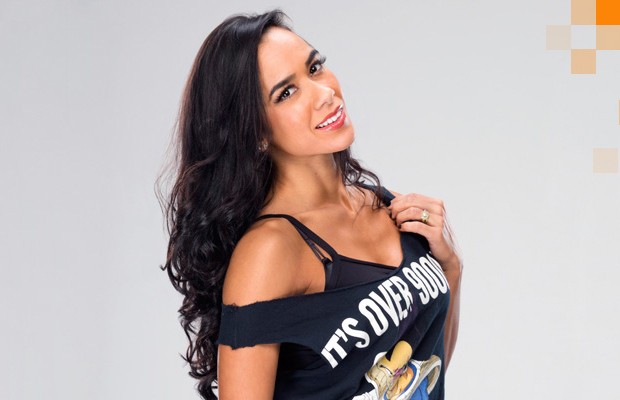 Hailing from the mean streets of Union City, New Jersey, AJ Lee went from being a boy-crazy (and arguably just plain crazy) valet to being the cornerstone of WWE’s Divas division and having numerous fansites devoted in her honor.

At the inaugural WWE Payback pay-per-view event on June 16, 2013, Lee fulfilled her life-long dream by capturing the WWE Divas Championship–she knocked former friend and tag team partner Kaitlyn off her feet to do it. Lee continues to reign as champion through November, with victories over Kaitlyn, Natalya, Brie Bella, Nikki Bella, Naomi, Cameron and even WWE NXT competitor Bayley. During this time frame, Lee also competed at SummerSlam, where she and Big E Langston unfortunately lost to Kaitlyn and Dolph Ziggler.

On the August 26, 2013 episode of Raw, Lee instigated a feud with the cast of the E! reality show Total Divas by cutting a scathing tirade infamously known as “#PipeBombshell.” Calling out The Bella Twins, The Funkadactyls, Natalya, Eva Marie and JoJo, Lee labeled the sexy reality show cast members as “a bunch of cheap, interchangeable, expendable, useless women.”

They did not pose a challenge to her, as Lee successfully defended the “Butterfly” belt against Brie Bella, Naomi and Natalya in a Fatal 4-Way Match the following month at Night of Champions. The following week on SmackDown, Lee aligned herself with Tamina Snuka.

This petite New Jersey native is quick on her feet and relies on her guile and a spectacular Black Widow octopus submission lock to dominate her opponents in the WWE Divas division. She also possesses a dangerous Shining Wizard knee smash, which is made more effective by the full rotation of her right hip. Lee learned a great deal from observing her previous charges, Daniel Bryan and Ziggler, and has developed into a formidable mat wrestler and technician.

Prior to joining WWE’s main roster on the May 27, 2011 edition of WWE SmackDown!, Lee held the FCW Divas Championship and the Queen of FCW crown while competing in the organization’s developmental league, Florida Championship Wrestling. She also held the WSU Tag Team Championship with Brooke Carter while competing on the independent circuit.