The Rock and Hulk Hogan On Classic WrestleMania Match, NXT Star Working To Get On TakeOver Card 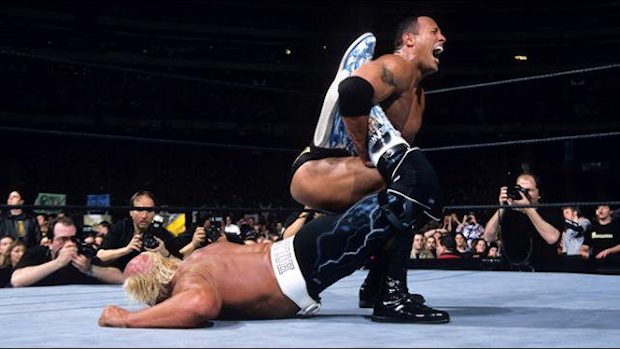 It was 16 years ago on Saturday when Hollywood Hulk Hogan and The Rock clashed at WrestleMania X8 in front of 67,237 fans at the SkyDome in Toronto, Ontario, Canada in a match dubbed as “Icon vs. Icon.”

Despite Rock portraying a face and Hogan a heel, the Canadian crowd cheered Hogan over Rock instead. In the end, The Rock prevailed over Hogan after two Rock Bottoms and a People’s Elbow. Following the contest, the two shook hands in respect and fought off Scott Hall and Kevin Nash, who were upset with Hogan’s attitude change.

Just before midnight, Hogan sent out this tweet remembering their classic encounter.

Never again will an arena shake to its foundation with electricity like it did on the night of WM18 brother HollyWoodHulkHogan 4Life pic.twitter.com/HtsMVyPORZ

The Rock is looking back at the match as well as he says it gave him goosebumps. He posted the following on Instagram recalling his showdown with Hogan and revealed what led to it coming together.

Goosebumps. 16yrs ago today, at WRESTLEMANIA, I had the honor of making history and breaking records with this man: The Immortal @HulkHogan. About a year prior to this match, Vince McMahon came to me and asked how I felt about bringing Hogan back to the @wwe and creating the main event at WrestleMania. I loved the idea and immediately saw the massive business opportunity for us but more importantly, giving the fans a once in a lifetime match to enjoy. I told Vince we should promote the match, ICON vs ICON and the winner would go down as the greatest of all time. Hogan did “the honors” (me winning) that night and passed the torch to me, as Andre the Giant had done for him 15yrs earlier at WrestleMania III. To this day, this crowd of 65,000 strong was the most electric and on fire I’ve ever had the privilege of performing in front of. They were ready. So were we. #ChildhoodHero #IconVsIcon #GreatestOfAllTime #WrestleMania18

– As seen in this video, WWE United Kingdom Champion Pete Dunne is putting in work at the WWE Performance Center weight room in hope of landing a spot at TakeOver: New Orleans on Apr. 7.