There's Still A Chance That Asuka vs. Becky Lynch Takes Place At The Royal Rumble - PWPIX.net

There’s Still A Chance That Asuka vs. Becky Lynch Takes Place At The Royal Rumble 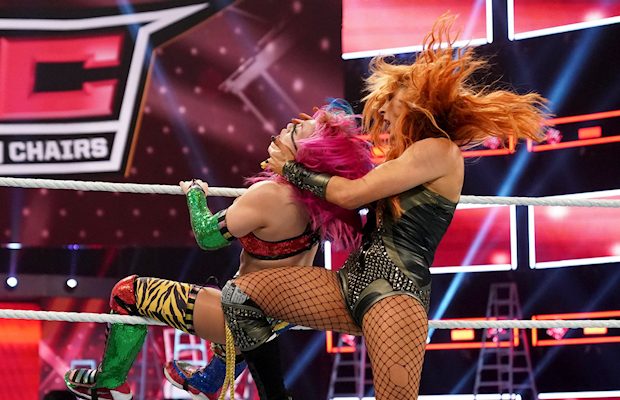 This past week’s episode of WWE Main Event included an interesting announcement for the Royal Rumble.

During the show, it was announced that Becky Lynch will get her rematch with Asuka for the SmackDown Women’s Championship at the Royal Rumble.

The latest episode of WWE Main Event (which airs on Hulu and two weeks later on the WWE Network) is a recap show looking back at this past week’s episodes of Raw and SmackDown LIVE. Scott Stanford, who hosts the show, said that Lynch would face Asuka at the Royal Rumble after footage aired of their SmackDown LIVE segment with Charlotte Flair.

As it turns out, this match has not been officially made. Paige announced Friday on Twitter that she tried to schedule Asuka vs. Lynch at the Royal Rumble before leaving her position as SmackDown LIVE General Manager, but the attempt got denied.

According to a tweet by John Pollock of POST Wrestling, WWE planned to announce the match last Tuesday on SmackDown LIVE, but it was decided before the show that the Royal Rumble card would be re-evaluated. WWE’s TV department wasn’t notified on the change of plans

According to Dave Meltzer of F4WOnline.com, WWE plans to decide on whether to hold the match or not after Christmas.