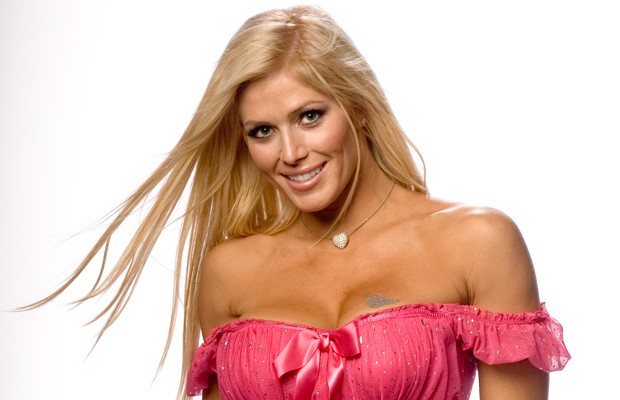 This WWE Diva grew up a competitive athlete and dancer. She was passionate about nutrition and fitness and in 1998 won the prestigious Miss Galaxy competition.

Torrie Wilson began her career in sports-entertainment with World Championship Wrestling (WCW) in 1999 and was a manager through late 2000. Torrie joined the WCW invasion of WWE in June 2001, and first appeared on SmackDown in a segment with WWE Chairman Vince McMahon. Her in-ring debut was in a Bra and Panties Match, teaming with Stacy Keibler against Lita and Trish Stratus at Invasion.

Despite being a part of the enemy, this breathtaking blonde became an instant sensation with audiences all over the globe. She returned to managing when she aligned herself with the “Japanese Buzzsaw” Tajiri. From there she moved on to more Diva-centric pursuits like ruling Lingerie, Bra and Panties, and Paddle On A Pole Matches.

In May 2003, Torrie adorned the cover of Playboy and set a new standard of beauty for the classic magazine. As this issue achieved incredible success, she returned to the cover for a second time in March 2004. On this occasion, however, she brought a partner in crime with her, the intoxicating Sable.

Torrie’s fame continue to skyrocket during 2005 when she joined Raw and participated in Mixed Tag, Evening Gown, Kimono, Santa’s Little Helper, and Lumberjill Matches. In June 2006, she defeated Candice Michelle in the first-ever Wet and Wild Match where the winner graced the cover of the Summer Special Issue of WWE Magazine. Torrie followed that pictorial in September by gracing the cover of FHM. Wilson went from cover girl to calender girl in FHM’s 2007 Calender. She was also listed in its Sexiest Women In The World issue. Torrie entered the fashion world when she unveiled her own clothing line called “Officially Jaded.”

To the sadness of her fans worldwide, Torrie and WWE parted ways in May 2008. Torrie Wilson will forever be remembered for her charisma, athleticism and dedication to sports-entertainment.